A California jury awarded Apple $119 million — far less than it demanded — in a patent battle with Samsung over alleged copying of smart phone features, and the jury made the victory even smaller by finding that Apple illegally used one of Samsung's patents. 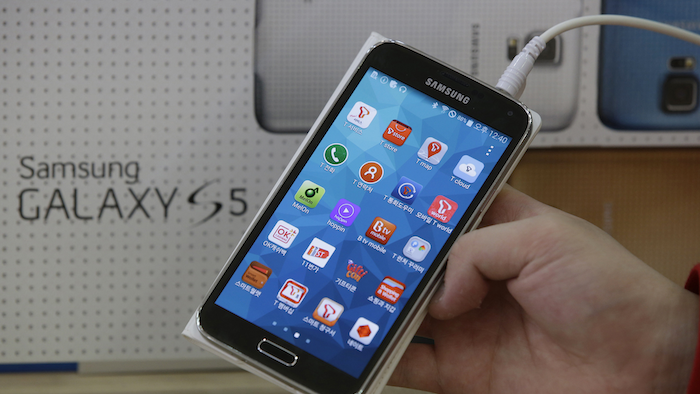 SAN JOSE, Calif. (AP) -- A California jury awarded Apple $119 million — far less than it demanded — in a patent battle with Samsung over alleged copying of smart phone features, and the jury made the victory even smaller by finding that Apple illegally used one of Samsung's patents.

The verdict was a far cry from the $2.2 billion Apple sought and the $930 million it won in a separate 2012 trial making similar patent infringement claims against older Samsung products, most of which are no longer for sale in the United States.

The jury found that Apple had infringed one of Samsung's patents in creating the iPhone 4 and 5. Jurors awarded Samsung $158,400, trimming that amount from the original $119.62 million verdict. Samsung had sought $6 million.

"Though this verdict is large by normal standards, it is hard to view this outcome as much of a victory for Apple," Santa Clara University law professor Brian Love said. "This amount is less than 10 percent of the amount Apple requested and probably doesn't surpass by too much the amount Apple spent litigating this case."

The award may be adjusted slightly in favor of Apple. Jurors were ordered to return to court Monday to continue deliberations on a minor matter that could result in a higher award for Apple. Because the jury was still empaneled, jurors were prevented from talking publicly about the case.

"Samsung willfully stole our ideas and copied our products," Apple spokeswoman Kristin Huguet said. "We are fighting to defend the hard work that goes into beloved products like the iPhone, which our employees devote their lives to designing and delivering for our customers."

Unlike the first trial in San Jose federal court in 2012, Samsung lawyers made Google a central focus of their defense. Google makes the Android software that Samsung and other smartphone manufacturers use as their operating systems. Samsung argued that Google was Apple's real target.

More than 70 percent of smartphones run on Android, a mobile operating system that Google Inc. has given out for free to Samsung and other phone makers

Both companies will now try to urge the judge to remove the others products from store shelves in the United State. Love and other experts say that neither company is expected to succeed with those demands.

"So far Apple has been unsuccessful at doing so and, without a sales ban, this case is unlikely to move the needle on the larger battle between Apple and Android," Love said.

The verdict marked the latest intellectual property battle between the world's top two smartphone makers. Apple and Samsung have sued each other in courts and trade offices around the world.

Apple and Samsung are locked in a bitter struggle for dominance of the $330 billion worldwide smartphone market. Samsung has become the leader of the sector with a 31 percent share after being an also-ran with just 5 percent in 2007. Apple, meanwhile, has seen its market share slip to about 15 percent from a high of 27 percent three years ago.

The jury of four men and four women delivered its verdict in the latest case after beginning deliberations on April 29.

During the monthlong trial, Apple argued that many of the key functions and vital features of Samsung phones were invented by Apple. Samsung countered that its phones operate on the Google Android software system and that any legal complaint Apple has is with the search giant.

Google entered the smartphone market while its then-CEO Eric Schmidt was on Apple's board. The move infuriated Apple co-founder Steve Jobs, who considered Android to be a blatant rip-off of iPhone innovations.

After removing Schmidt from Apple's board, Jobs vowed that Apple would resort to "thermonuclear war" to destroy Android and its allies. At the recent trial, Samsung attorneys produced an email Jobs sent to executives in 2010 urging them to wage a "holy war" against Android in 2011.

Early in deliberations, the jury wanted to know if Jobs had mentioned Google when considering the lawsuit that was eventually filed in 2012, several months after the Apple founder died of cancer.

U.S. District Judge Lucy Koh told jurors no additional evidence was available to them beyond what was presented during the trial.

Koh answered similarly to questions about Samsung's chief executive officer's reaction when informed that Apple executives had complained to executives at the South Korean company about alleged patent infringement.

ISM: Solid Numbers All Around