Competition is heating up among Japanese and U.S. manufacturers to invent and refine autonomous car technologies that reduce the human driver's role in controlling the vehicle with the steering wheel and the brake. 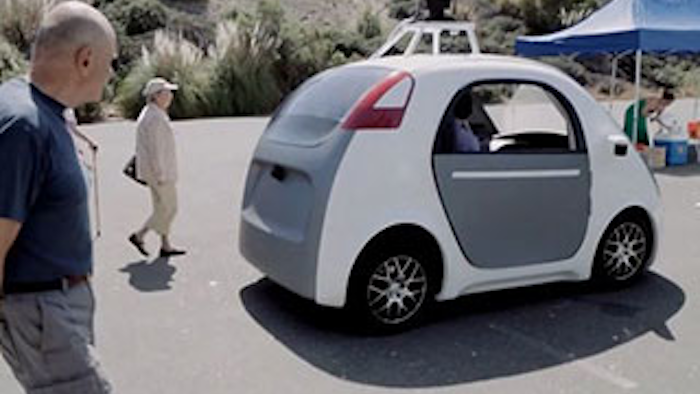 Competition is heating up among Japanese and U.S. manufacturers to invent and refine autonomous car technologies that reduce the human driver's role in controlling the vehicle with the steering wheel and the brake.

With a solid track record of building quality cars for decades, Toyota Motor Corp., Honda Motor Co. and Nissan Motor Co. are approaching this new frontier with the intent of further adding value to existing cars by commercializing ideas dreamt up for automated driving support.

While confident of their prowess in this expanded business domain, the Japanese automakers are apparently feeling competition from across the Pacific, not just from their peers like General Motors Corp. and Ford Motor Co. but, to an even greater extent, an unconventional player -- Google Inc.

The Internet technology behemoth has been testing what it calls self-driving cars. Japanese developers of automated driving aid systems are paying marked but cautious attention to this undertaking from a player in a completely different industry with a history of conquering key segments of information and mobile technology.

Against the backdrop are optimum conditions met on three fronts -- sufficiently developed sensor technology and computer capabilities plus support from society including the government, said Koibuchi, who is engaged in developing automobile driving technology at Toyota's Higashi Fuji Technical Center in Susono, Shizuoka Prefecture at the foot of Mt. Fuji.

Toyota and Honda recently unwrapped their technologies to coincide with the Sept. 7 opening of the World Congress on Intelligent Transportation Systems in Detroit, Michigan.

Toyota said it has tailored its automated driver assistance technology to the U.S. market, focusing on a system that controls the steering wheel on highways to keep the vehicle in lane and monitors the driver. If the driver releases his hands from the steering wheel and looks away, a warning will be issued to urge him to return to the driving position.

Toyota is planning to build these features into a model based on the Lexus GS sedan with a top speed of 110 kilometers per hour for U.S. sale in a few years.

Honda has also come up with automated technology that controls the steering wheel and brake. Honda's system can steer a car into a different lane on a highway as well. It is planning a live performance of the car on a Detroit highway during the five-day ITS congress.

Honda has also devised another mechanism for a driver who falls sick at the wheel or becomes otherwise unable to drive to reach out for help from another car around it on a highway. If any car responds, the sick driver's car would be guided by the other car using the system to get to a nearby hospital, for instance.

Nissan Motor CEO Carlos Ghosn has pledged that his company will start incorporating autonomous driving technologies into cars such as for steering the car safely on congested highways and automating parking.

The idea of automated driving is meant to improve safety and reduce the hassle of driving.

In the United States, where an average person drives 48 minutes per day, hopes are high that autonomous technology will help reduce accidents. More than 90 percent of the around 6 million traffic accidents per year in the country are attributed to human error.

In Japan, manufacturers believe autonomous vehicles will be appreciated by a growing number of aging drivers whose errors at the wheel are a constant source of road accidents.

The technology "should be able to aid the driver in improving visibility in the evening or at night and help people drive longer in their lives," said Seigo Kuzumaki, chief of safety technology planning at Toyota.

Expectations are growing about the innovation's business potential in stimulating market demand in Japan if Japanese manufacturers can take the lead in development. "It will help substantially shore up the competitiveness of Japanese industry including parts makers," said an official at a major automaker.

Google, meanwhile, is apparently taking a completely different road in developing its ideas for its self-driving car.

Unveiled for testing in May, the curvy two-seater vehicle had no steering wheel and no brake and axel pedals. With a touch of a button, it started running smoothly in a test drive. A women who took a ride said, "If I had a self-driving car, I can spend more time hanging out with my kids or helping them with their homework..."

A Google official involved in the development said they are not trying to put automated driving into existing business models.

Just as it has eventually come to lead the smartphone market with its Android operating software, Google could also come up with successful commercialization ideas for self-driving cars. "It will enable people to travel themselves or deliver goods more efficiently, which can shake automakers' framework of mass-production and marketing," an analyst said.

A developer at another Japanese automaker is apparently confident despite the growing challenge from the U.S. technology company, saying, "We are by all means more competitive than Google in car development technology and know-how."

While Google's foray into automated driving raises the possibility that the conventional idea of the car could be reinvented radically, Japanese carmakers will face the challenge of trying to lead the world in innovation in this technology, hoping to repeat their success in cars as we now know them.

Ellison Steps Aside As Oracle CEO