The OECD again slashed its forecast for the 17 European Union countries that use the euro, saying it will shrink by 0.6 percent this year, after 0.5 percent drop in 2012. The OECD had predicted a 0.1 percent decline for the eurozone in its report six months ago — and this time last year, it forecast growth of nearly 1 percent for 2013. 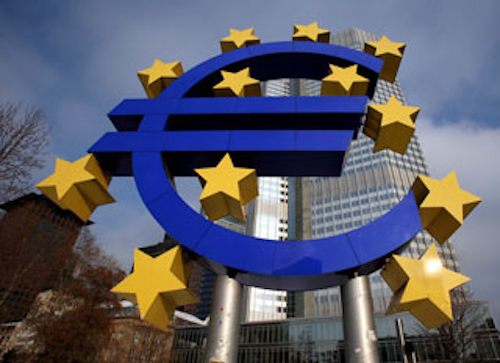 In its half-yearly update, the Organization for Economic Cooperation and Development said that protracted economic weakness in Europe "could evolve into stagnation with negative implications for the global economy."

The OECD again slashed its forecast for the 17 European Union countries that use the euro, saying it will shrink by 0.6 percent this year, after 0.5 percent drop in 2012. The OECD had predicted a 0.1 percent decline for the eurozone in its report six months ago — and this time last year, it forecast growth of nearly 1 percent for 2013.

The U.S. economy will continue to outpace Europe, the OECD said, with growth of 1.9 percent in 2013 and 2.8 percent in 2014. For global gross domestic product, the OECD forecasts an increase of 3.1 per cent for this year and by 4 percent for 2014.

Noting that eurozone policymakers have "often been behind the curve," the OECD warned that Europe was still beset by "weakly capitalized banks, public debt financing requirements and exit risks."

Meanwhile, the eurozone's 12.1 percent unemployment "is likely to continue to rise further...stabilizing at a very high level only in 2014," the OECD said.

The eurozone economy shrank 0.2 percent in the January-March period, the sixth consecutive quarterly decline, making it the eurozone's longest ever recession.

Austerity measures have inflicted severe economic pain and sparked social unrest across the continent. Europe's young people are especially suffering, with unemployment of around 50 percent in some of the hardest-hit eurozone countries such as Spain and Greece.

With a population of more than half a billion people, the EU is the world's largest export market. If it remains stuck in reverse, companies in the U.S. and Asia will be hit.

Other major economies have faltered this year but none are in recession, like Europe . The U.S. economy grew 2.2 percent last year and China, the world's No. 2 economy, is growing around 8 percent a year.

The OECD urged Europe to bolster its efforts to support economic recovery. While the European Central Bank's loose monetary policy has helped, "more can be done through further non-conventional measures," and the establishment of a Europe-wide banking union, the organization said.

In the U.S., the organization urged politicians to soften automatic across-the-board budget spending cuts to make them less harmful to growth, and said "a credible long-term fiscal plan needs to be put in place."