Veterans and disabled workers who often struggle to find work could have an easier time landing a job under new federal regulations. 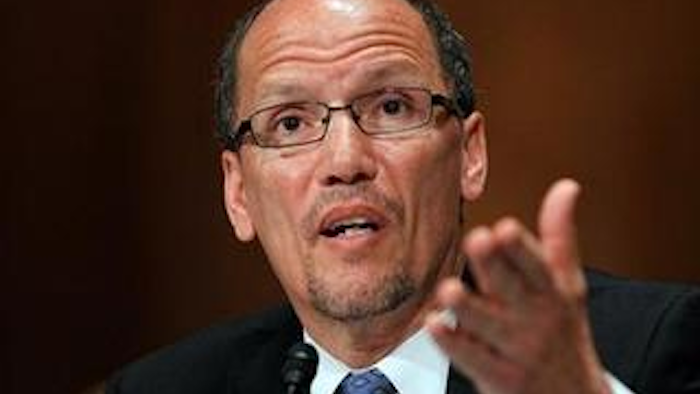 WASHINGTON (AP) — Veterans and disabled workers who often struggle to find work could have an easier time landing a job under new federal regulations.

The new requirements could have a major impact on hiring since federal contractors and subcontractors account for about 16 million workers — more than 20 percent of the nation's workforce. But some business groups have threatened legal action, complaining that the rules conflict with federal laws that discourage employers from asking about a job applicant's disability status.

Labor Secretary Thomas Perez called the new policy a "win-win" that will benefit workers "who belong in the economic mainstream and deserve a chance to work and opportunity to succeed." He said it also would benefit employers by increasing their access to a diverse pool of new workers.

"To create opportunity, we need to strengthen our civil rights laws and make sure they have the intended effect," Perez told reporters in a conference call announcing the rules.

The unemployment rate for disabled workers is a staggering 14.7 percent, nearly twice the rate of 7.4 percent for the general population. The jobless rate for all veterans is 7.3 percent, but for veterans who served in the Iraq and Afghanistan wars it's 9.9 percent, according to the most recent data from the Bureau of Labor Statistics.

The rules are expected to affect about 171,000 companies doing business with the federal government, said Patricia A. Shiu, director of the LaborDepartment's Office of Federal Contract Compliance Programs. Generally, the rules affect those contractors with at least 50 employees and $50,000 in government contracts.

Shiu estimated as many as 585,000 disabled workers more than 200,000 veterans could get new jobs if all the companies meet the hiring goals within the first year of compliance.

Labor officials say the new benchmarks are only goals and not specific hiring quotas. But companies that can't provide documents showing they tried to meet the goal could risk having their federal contracts revoked.

If a company can't immediately meet the new goals, it is required to examine recruitment or outreach practices to decide how to improve. No fine, penalty or sanction would be imposed solely for failing to meet the goal, Shiu said.

The new metrics for the disabled and veterans are similar to those contractors have long used for women and minorities. They will take effect six months from now to give contractors enough time to process them. Under the rules, companies must keep detailed records of recruitment and hiring efforts taken to meet the new goals.

Daniel Yager, president of the HR Policy Association, which represents more than 350 large U.S. corporations, suggested his group may challenge the disability rules in court.

"Simply mandating a numerical 'goal' for all jobs in all contractors' workplaces, and then requiring employers to invade the privacy of applicants and employees with questions about their physical and mental condition, destroys everything companies have done to integrate individuals with disabilities into the workforce in a sensitive, discreet manner," Yager said.

Carol Glazer, president of the National Organization on Disability, praised the Obama administration for approving the new rules. She predicted that employers would not have a hard time meeting the new benchmarks for disabled workers.

"There are many organizations in the disability field who stand prepared to help companies meet these goals," Glazer said.