CSX is continuing to closely monitor the environmental impact of a fiery oil-train derailment in southern West Virginia, a spokeswoman said Tuesday. 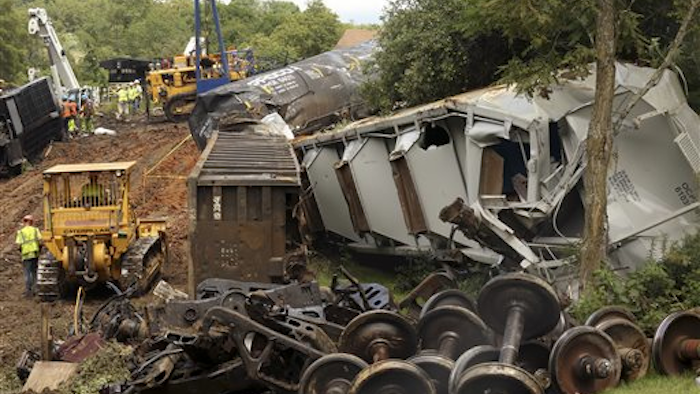 The company held a public informational meeting that drew a sparse turnout Tuesday evening at the Glen Ferris Inn.

On Feb. 16, 27 cars of a CSX train's 109 cars derailed during a snowstorm in Mount Carbon. Twenty of the cars leaked oil, some of which burned or was released into the ground.

Under a March consent order with the U.S. Environmental Protection Agency, the railroad agreed to a long-term plan for cleaning up and restoring the area around the derailment.

"It's important for the community to know that we said we would be here," CSX spokeswoman Melanie Cost said. "This is part of that process. We want to keep the open dialogue for them."

Donna Shabdue lives near the derailment site and was forced to evacuate her home for more than a day. She showed up to the meeting to voice her concerns about local emergency response and pleaded for quickly informing the public about future incidents.

The train was carrying 3 million gallons of Bakken crude and headed to Yorktown, Virginia. In recent years, trains hauling crude from the Bakken region of North Dakota and Montana have been involved in fiery derailments in six states.

The Federal Railroad Administration is investigating the West Virginia accident, which shot fireballs into the sky, burned down a nearby house and caused fires on the ground that smoldered for days.

The cause of the derailment hasn't been released. Speed had previously been ruled out as a factor. The FRA has said the train was going 33 mph at the time of the crash. The speed limit was 50 mph.

CSX said more than 181,000 gallons of crude oil was recovered after the accident. About 10,000 tons of soil has been removed and shipped for disposal. Additional soil removal is planned next to the Kanawha River and a tributary at the derailment site.

Air, water and soil sampling continues. The water monitoring is at five locations along the river, including a drinking water intake, because of the occasional presence of oil sheens. CSX said the local drinking water supply has been unaffected by the spill.

Oil-absorbing booms were attached to a metal wall more than 410 feet long in the river as an additional containment measure. The wall will eventually be taken down once the sheens are no longer detected, Cost said.

Cost declined to disclose how much the company has spent on the cleanup.