Green chiles have defined New Mexico for generations, gaining fans and fame around the globe. However, as this year's harvest begins, labor shortages, shrinking acreage, drought and foreign competition have hurt production in the state. 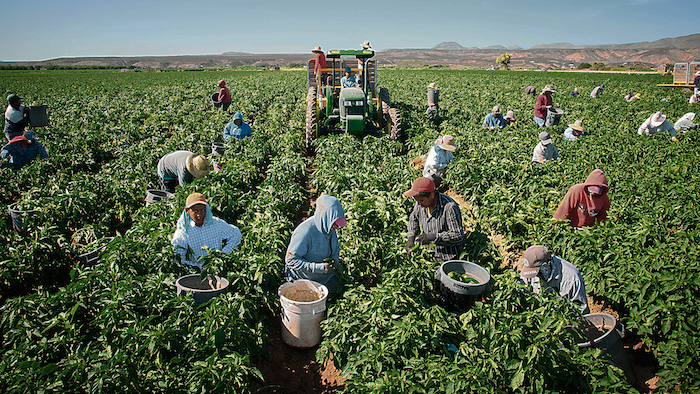 However, as this year's harvest begins, labor shortages, shrinking acreage, drought and foreign competition have hurt production in the state.

Farmers and producers say the problems reveal the need for changes in the industry.

To rejuvenate production, investors and inventors are testing machines that would harvest and de-stem the crop.

The delicate chiles are now picked by hand, and problems with bruising and the removal of stems have made it difficult to make the transition to machines.

"The labor force is getting older and not a lot of young people are getting into the business," said Ed Ogaz, owner of the Anthony, New Mexico-based chile wholesaler Seco Spice Co. "Something needs to happen."

Ogaz prefers the old ways and believes farmers need more laborers to improve production as acreage dedicated to chile production has fallen to a 43-year low in the state.

Chile has been a staple of New Mexico cuisine for centuries, and the Hatch region has become world famous for its flavorful hot peppers.

Chile is also the state vegetable and the basis of the official state question, "red or green?"

In recent years, researchers at New Mexico State University have been trying to solve the labor issue by developing machines for the harvest.

Elad Etgar, inventor of a chile-harvesting device at an Israeli company, said he will be testing his machine for the next two months. After the harvest, he'll sit down with farmers to assess its performance.

"So far, everyone supports it but we will have to see," Etgar told The Associated Press.

Another device by a New Hampshire investor also is being tested.

Ogaz said he is withholding judgment until he sees how the devices harvest green chiles without damaging the signature look.

The stakes are high. In 2014, New Mexico saw a 10 percent decline in acres of chiles harvested. Experts say the state is losing chile acreage to West Texas and Mexico, partly because of the cost and availability of labor.

Despite marketing efforts and the attractiveness of New Mexico chiles to national suppliers, federal numbers show the value of New Mexico red and green chiles was estimated at $38.7 million, compared to $49.5 million in 2013.

State officials say the number reflects only the value of agricultural items in the raw commodity state. They point to New Mexico Chile Association numbers that say the full economic impact of chiles, both fresh and processed, was more than $460 million a year.

"Fresh green chile is what satisfies our cravings in August and September, so that's the foundation of New Mexico's chile economy," New Mexico Secretary of Agriculture Jeff Witte said.