Tesla Motors, which makes a highly acclaimed $70,000 electric car, has paid off a startup loan from the U.S. government nine years early. The Palo Alto, Calif., company said it wired in a $451.8 million payment to the government on Wednesday. The money, coupled with two prior payments, paid off a $465 million loan Tesla got from the Department of Energy loan in 2010 to foster development of advanced-technology vehicles. 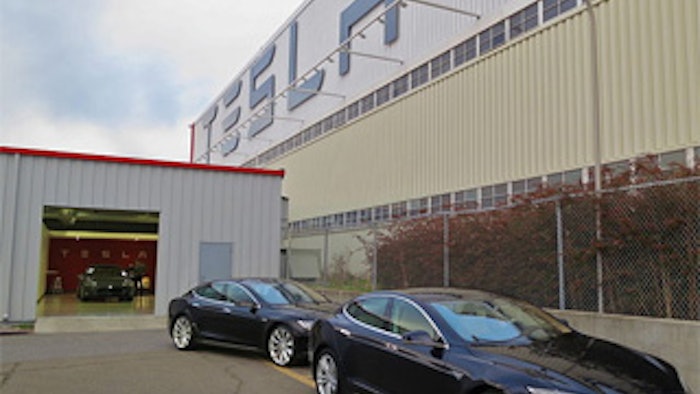 The Palo Alto, Calif., company said it wired in a $451.8 million payment to the government on Wednesday. The money, coupled with two prior payments, paid off a $465 million loan Tesla got from the Department of Energy loan in 2010 to foster development of advanced-technology vehicles.

Tesla used money from a $968 million stock and note sale that closed Wednesday to repay the debt.

The repayment is good for Tesla's image because the company no longer owes taxpayers money. And the government quickly touted the payment as an example of a success from an Energy Department loan program used to start clean-energy companies. The $34 billion loan portfolio has seen several high-profile defaults, including solar panel maker Solyndra, plus a potential default by electric car maker Fisker Automotive.

But the Energy Department said in a statement that losses to date amount to 2 percent of the portfolio, or about $680 million. The department said it has helped to start 19 new clean-energy power plants that have added enough solar, wind and geothermal generating capacity to power a million homes.

"When you're talking about cutting-edge clean-energy technologies, not every investment will succeed," Energy Secretary Ernest Moniz said.

Earlier this month, Tesla reported its first quarterly profit. Its stock price has more than doubled since the first of the year and closed Wednesday at $87.24. Also in May, Consumer Reports magazine said the Model S tied for the highest rating in the history of the magazine's auto testing.

Industry analysts say the success of the debt and stock offerings give the company working capital for the future and are a strong indicator of the market's confidence in the company, led by PayPal billionaire and SpaceX founder Elon Musk.

The payment helps Tesla show its independence, said Dougherty & Co. analyst Andrea James. "It allows them to say, 'We're not dependent on low-interest financing from the government,'" she said.

It also lets Musk thumb his nose at critics like Republican presidential candidate Mitt Romney, who in the first presidential debate accused President Barack Obama of picking "losers" for putting money into Tesla and Fisker.

Tesla Motors Inc. is among five auto companies that got loans from the Energy Department to develop clean vehicles, including Fisker, Ford Motor Co., Nissan Motor Co. and The Vehicle Production Group LLC.

The government is in danger of losing $171 million at Fisker, which may soon seek bankruptcy protection, and it could lose about $45 million at VPG. The Allen Park, Mich.-based company got its loan to build wheelchair-accessible vans. About 25 percent of the company's models ran on compressed natural gas, a feature that helped it win the loan.