China's importance as a major consumer market is bringing fresh headaches for companies, and even celebrities, seeking to protect and claim brand names. 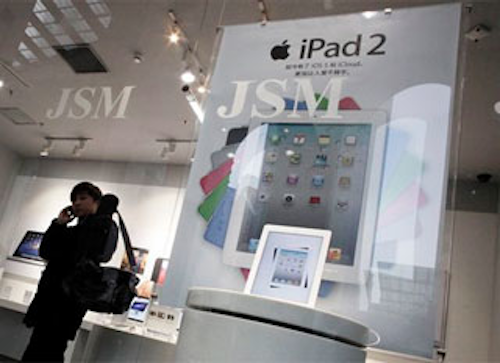 SHANGHAI (AP) — iPotato, isock, icouch, istove, i-you-name-it. An Internet search for "i'' words from A to Z will turn up just about any combination you might think up, from all over the world, only a handful of them related to Apple Inc.

Given its penchant for "iproducts," Apple's current troubles in China over the iPad trademark are not its first, and are unlikely to be its last. China's importance as a major consumer market is bringing fresh headaches for companies, and even celebrities, seeking to protect and claim brand names. That's apart from the usual problems with piracy and other infringements.

Financially troubled Proview Electronics Co., a computer monitor and LED light maker, says it registered the iPad trademark in China and elsewhere more than a decade ago and wants Apple to stop selling or making the popular tablet computers under that name. Apple says Proview sold it worldwide rights to the iPad trademark in 2009, though in China the registration was never transferred.

The number and variety of such disputes is rising as Chinese companies seek to leverage trademarks to their advantage, either for the sake of acquiring attractive brand names or for financial gain, said You Yunting, a lawyer with the Debund Law Office in Shanghai, which specializes in trademarks and patents.

"This is an era of development and people are paying more attention to brand names now," said You. "China is not good at innovation. I'd say Proview would not be suing Apple if its financial situation was fine."

Apple and Proview are battling in Chinese and U.S. courts. Apple's right to make and market the iPad under that name in China may hinge on a pending ruling from the High Court in Guangdong, in southern China. Over the past month, the conflict has escalated with Proview challenging not only Apple's use of the mainland Chinese trademark but also the 2009 deal, which involved worldwide rights to the iPad name.

Whatever the outcome, the dispute highlights the rising stakes of the trademark name game in the increasingly lucrative China consumer market, one that most global companies cannot afford to miss out on regardless of the risks.

"China's been infringing on patents and copyrights and so on from the beginning. Now, it's a globally important market and this is where a lot of companies are depending on for growth," said James McGregor, a senior counselor for consulting firm APCO Worldwide and a former chairman of the American Chamber of Commerce in China.

The issue touches practically every type of product or industry.

Former NBA star Michael Jordan is suing a Chinese sportswear maker, Qiaodan Sports Company Ltd., for unauthorized use of his name and images associated with his own brand, such as his old jersey number, "23".

"Qiaodan," pronounced "CHEEOW-dan," is the moniker Jordan has been known by in China since he gained widespread popularity in the mid-1980s.

"I am taking this action to preserve the ownership of my name and my brand," Jordan said in a video clip on his website. "No one should lose control of their own name."

Qiaodan said in a statement that its brand has no direct relationship with Michael Jordan and professed to respect his "athletic achievements and contributions" in basketball.

"I would not say Proview registered its trademarks maliciously, since it did it more than 10 years ago. But I would say that the Qiaodan company did, since Jordan was famous before the company was even founded," said Tao Xinliang, president of the Intellectual Property Institute at Shanghai University.

The craze for grabbing trademarks is of course not confined to China: The recent hoopla over New York Knicks point guard Jeremy Lin touched off a rush in the U.S. to trademark the "Linsanity" catchphrase — including a trademark application on Lin's behalf.

But Chinese businesses seem to be taking an especially proactive approach. A maker of basketballs, volleyballs and soccer balls in the east Chinese city of Wuxi registered the "Jeremy S.H.L." trademark — for Lin's Chinese name Lin Shu-hao — back in July 2010.

Under China's trademark system, legal experts say, squatters find it easy to claim trademarks they have no intention of using, and then demand that would-be users pay up.

"Abusive registrations" under China's trademark system abound," said Mark Cohen, a visiting professor at Fordham Law School. "In China today there is everything from Apad to Zpad registered or under consideration — from companies that may not make products that compete with the iPad or make products at all," he said in an emailed commentary.

The problem, said Huang Wushuang, a professor at the Intellectual Property Institute of the East China University of Political Science and Law, in Shanghai, is not with the laws.

"The laws are sound, but some people in China just like to be free riders," Huang said.

Hence such products as the iPhone gas cookers recently found in Wuhan, a city in central China, complete with the iPhone name and famous apple symbol, but none of the device's myriad functions. Or the many fake Apple retail outlets found in many cities.

In contrast, Proview registered its ipad trademark for its own "Internet Personal Access Device," part of its "iFamily" range of products launched around 2000, long before Apple came up with its popular tablet computer.

With the iPad 3's launch looming, many in China are expecting Apple to settle with Proview, as it has in past trademark scrapes. "It will be costly if Apple loses, and not being able to sell the iPad under that name here in China, such a big growing market, would hurt the company's image," said Tao.

A ruling against Apple in Guangdong could also oblige the company to only add its famous logo to the machines after they are exported from China, said Huang.

Many in China believe Apple will settle with Proview to avoid disruptions in its marketing and supply chain. Proview has repeatedly announced its willingness to settle. It appears desperate as Taiwan's Fubon Insurance Co., one of the company's major creditors, has moved to have the ailing computer monitor maker liquidated.

Others say Apple may feel giving in to Proview would set a dangerous precedent given the size of the Chinese market and its importance. Apple has limited its comments on the Proview dispute to a terse, two-sentence statement.

"They have to try to draw the line somewhere. What's the next guy going to do?" said McGregor. "If you're a big company like Apple ... it's like the U.S. not giving in to terrorism; they may not give in to frivolous lawsuits because then you just invite other people to do the same."