North Carolina lawmakers and passersby stopped to take in a display of Tesla Motors' award-winning electric cars Wednesday as the company presses against a bill in the General Assembly that effectively outlaws Tesla's Internet-based sales model. 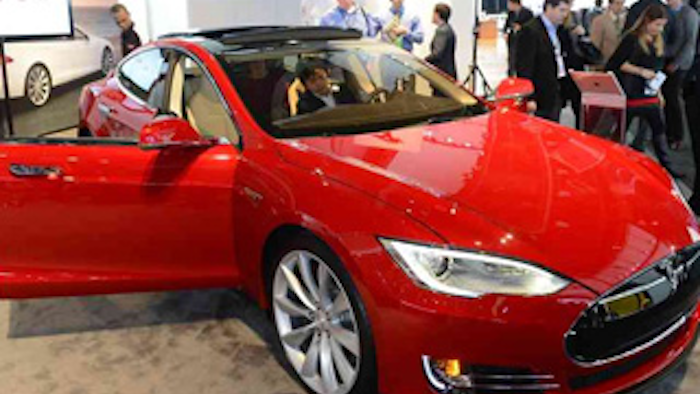 RALEIGH, N.C. (AP) — North Carolina lawmakers and passersby stopped to take in a display of Tesla Motors' award-winning electric cars Wednesday as the company presses against a bill in the General Assembly that effectively outlaws Tesla's Internet-based sales model.

The California automaker drew sporadic crowds around its Model S electric car outside the legislative building. The company is lobbying against a bill backed by the state's auto dealers that prevents electronic transactions with auto manufacturers.

The Senate already passed the bill, which mostly updates the relationship between manufacturers and dealers but has generated interest because of the outcry over Tesla. The auto dealers who pushed for it argued Tesla is operating with an unfair advantage and the existing laws are designed to protect consumers in terms of warranties, service and other aspects of the industry.

Tesla has asked consumers to tell their legislators that the only thing dealers are protecting is their monopoly on retail.

North Carolina isn't the first state to present a road block. The company operates 29 stores and galleries across 14 states and Washington, D.C., but it doesn't physically sell its cars at those locations. Instead, the company directs customers to the Internet.

Most states have laws protecting franchise dealers by requiring manufacturers to sell through them. In other states, though, auto dealers and legislators have mostly recently tried to halt the expansion of the stores, not to restrict online sales.

Colorado stopped their spread through a state law in 2010. Since then, Minnesota lawmakers unsuccessfully pushed for a similar measure. In New York and Massachusetts, dealers have unsuccessfully sued to shut down the dealer's stores.

The Model S is Motor Trend's 2013 car of the year and Consumer Reports' highest-rated car in the publication's history. The Model S comes with a base price tag of about $70,000 and can travel up to 300 miles on a single charge.

The Senate pages gathered around the car Wednesday were more impressed by the design.

"The whole car just looks futuristic," said Elliott Graves, a 15-year-old student at Rockingham Early College High School in Wentworth. "The dashboard is so cool. The handle bars go away until you come back."

He was referring to the door handles that automatically retract when the car is locked. Another Senate page was also taken by the touchscreen dashboard that incorporates cabin controls, vehicle data, communications and media.

"It's like a mini computer in there," said Jineet Patel, 16, of Wake Early College of Health and Sciences.

Rep. Mitchell Setzer, R-Catawba, passed by as the boys were gushing over the car. He said the Model S looks impressive, but he's not sure he can handle it.

"It's a beautiful car, but I have enough trouble with the iPad. It's like something out of 'The Jetsons.' Y'all don't know 'The Jetsons,'" he said, addressing the pages about the 1960s futuristic cartoon show. "I'm dating myself here."

Sen. Ellie Kinnaird, D-Orane, lauded the creativity and design of the car after watching it automatically start up when she sat down, but she said she doesn't regret joining the 47 other senators who voted unanimously for the bill.

"Dealerships are one of those basic industries that are the roots of a small town," she said. "The model convinced me that, while this is visionary, the reality is it has to evolve to a local presence."