President-elect Donald Trump's choice to head the U.S. Environmental Protection Agency told senators Wednesday that he intended to work cooperatively with states and industry to return the federal watchdog to what he called its proper role. 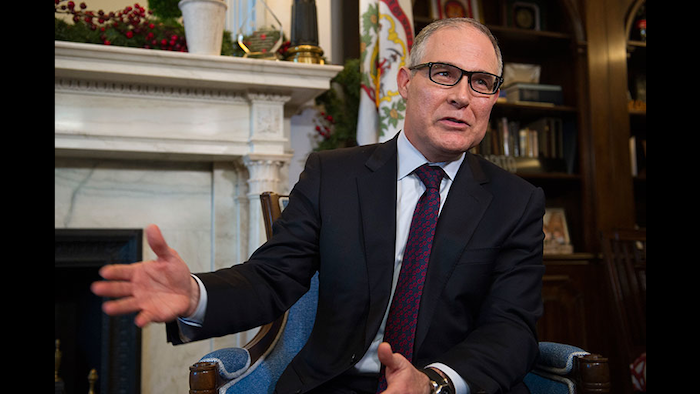 WASHINGTON — President-elect Donald Trump's choice to head the U.S. Environmental Protection Agency told senators Wednesday that he intended to work cooperatively with states and industry to return the federal watchdog to what he called its proper role.

Oklahoma Attorney General Scott Pruitt has a long history of criticizing and suing the agency he is now being tapped to lead. His nomination was fiercely opposed by environmentalists who cite his cozy relationships with oil and gas industry executives who have donated generously his political campaigns. However, he is expected to win approval by the Republican-led Senate.

"Environmental regulations should not occur in an economic vacuum," Pruitt said. "We can simultaneously pursue the mutual goals of environmental protection and economic growth."

As his confirmation hearing got underway early Wednesday, raised voices could be heard from people outside in the hall who were not allowed in. The room accommodated about 100 people, with most of the seats taken by congressional staff, reporters and others who were allowed in early. Only a handful of seats remained for the public.

One woman was quickly wrestled out of the room by three police officers as she pulled out a roll of yellow crime scene tape and shouted "We don't want EPA gutted!"

Senate Republicans began by praising what they said was Pruitt's record of enforcing environmental laws "when appropriate." Court records show scant evidence of Pruitt acting to protect the environment in years as a state regulator.

Shortly after Pruitt took office in Oklahoma in 2011, he disbanded the unit responsible for protecting the state's natural resources. Instead, he reassigned his staff to focus on filing lawsuits against the federal agency he's now selected to lead.

Records also show that Pruitt also failed to push a legal challenge initiated by his predecessor to protect Oklahoma's rivers from pollution caused by animal waste, after receiving tens of thousands of dollars in campaign contributions from individuals connected to the poultry industry.

In Oklahoma, he joined with other Republican attorneys general in opposing the Obama administration's Clean Power Plan, which seeks to limit planet-warming carbon emissions from coal-fired power plants. Pruitt also sued over the agency's recent expansion of water bodies regulated under the federal Clean Water Act, which has been opposed by industries that would be forced to clean up polluted wastewater.

Though Pruitt ran unopposed for a second term in 2014, campaign finance reports show he raised more than $700,000, much of it from people in the energy and utility industries. Among those who gave the maximum contribution of $5,000 to Pruitt's campaign was Continental Resources Chairman and CEO Harold Hamm, an Oklahoma oil tycoon who has been advising the president-elect.

Like Trump, Pruitt has also publicly cast doubt on the extensive body of scientific evidence showing that the planet is warming and that man-made carbon emissions are to blame.

Pruitt's office declined to comment on his past fundraising, instead referring inquiries to Trump's transition team, which didn't respond to requests for comment. A lawyer for two political action committees tied to Pruitt told AP earlier this month they would be dissolved before any move to Washington.

Pruitt has faced similar criticism over his handling of the poultry case initiated by his predecessor that has been languishing in federal court for more than six years. During his campaign in 2010, Pruitt received nearly $38,000 in contributions from executives with the poultry companies named in the lawsuits and their lawyers.

"Regulation through litigation is wrong in my view," Pruitt told The Oklahoman newspaper in 2015.

Pruitt let expire a 2003 agreement between Arkansas and Oklahoma aimed at reducing pollution from poultry waste and approved a new deal that called for more water-quality testing while agreeing not to institute any new enforcement actions or judicial proceedings against the industry.

Despite a lack of resolution in the case, the water quality in northeastern Oklahoma has improved during Pruitt's tenure, said Ed Fite, longtime administrator of Oklahoma's Scenic Rivers Commission.

Still, other Oklahomans who work to protect the state's waterways say they have grave doubts about Pruitt's commitment to environmental enforcement.

Pruitt also has faced sharp criticism from environmentalists for failing to take any action to help curb a dramatic spike in earthquake activity that scientists have linked to the underground disposal of oil and gas wastewater.