Hundreds of people flocked to Concord on Tuesday to testify, cheer and boo as they debated the merits of right-to-work legislation during the session's first public hearing on the topic. 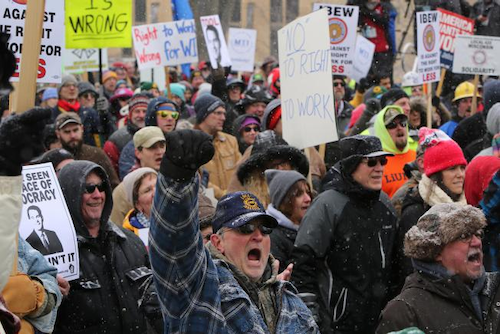 CONCORD, NH — Hundreds of people flocked to Concord on Tuesday to testify, cheer and boo as they debated the merits of right-to-work legislation during the session's first public hearing on the topic.

"There is no evidence this legislation would improve work opportunities, job security or employment for hard-working Granite Staters," said Bob Jones, a public safety union president.

About 120 people signed up to testify before the Senate Commerce Committee. The legislation would bar both public and private unions from requiring employees to contribute dues, fees or any other type of payment, although union members could voluntarily pay dues. If the law passes, any collective bargaining agreement that requires payments would become null and void.

Legislators and business leaders who testified in support of the bill said it would give workers more freedom and entice businesses to New Hampshire. But union representatives and members said a right-to-work law would weaken collective bargaining power and threaten worker protections and wages.

Passing right-to-work legislation is part of a national movement by Republicans. Kentucky recently passed a similar law, and Missouri is considering one.

In New Hampshire, Republican Gov. Chris Sununu and GOP House and Senate leaders support right-to-work legislation, but it's not a done deal. Both chambers have rejected the measure at times in the past, even under Republican control.

Opponents seemed to outnumber supporters, and they applauded or booed loudly depending on the testimony. Sen. Dan Innis, the committee chair, warned people several times to quiet down and threatened to time-limit speeches if the catcalls did not cease.

Some audience members grew particularly heated during remarks by Matthew Leen, vice president of the National Right to Work Committee. In his testimony supporting the bill, Leen compared compelling workers to pay union dues to a cab driver kidnapping someone and forcing them to pay for the ride.

State and federal law says employees cannot be forced to join a union, even if they benefit from the union's representation. But collective bargaining agreements can require non-members to pay fees or other dues for the benefits they receive. If passed, the right-to-work legislation would ban that.

Mark Hounsell, a former Republican state senator and member of the state's Public Employee Labor Relations Board, said allowing people to get out of paying union dues amounts to stealing.

"This bill legalizes theft of services among the men and women working side by side every day," he said.

Tom Sullivan, a vice president of operations at firearms manufacturer Sturm, Ruger & Co., said the company was specifically looking for a right-to-work state when it chose to build a new factory.