U.S. manufacturing activity expanded in December to its highest level in two years, as new orders and production jumped in a positive sign for economic growth. 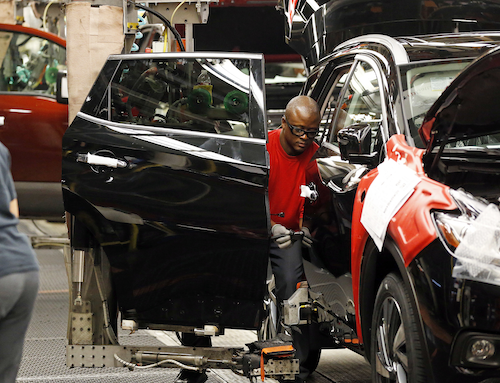 In this April 6, 2016, photograph, a technician works on a door assembly for a Nissan Altima on the line at the Nissan Canton Vehicle Assembly Plant in Canton, Miss. On Tuesday, July 5, 2016, the Commerce Department reports on U.S. factory orders for May. (AP Photo/Rogelio V. Solis)

WASHINGTON — U.S. manufacturing activity expanded in December to its highest level in two years, as new orders and production jumped in a positive sign for economic growth.

The Institute for Supply Management said Tuesday that its manufacturing index came in at 54.7 last month, up from 53.2 in November and the highest reading since the end of 2014. Any reading over 50 signals growth.

U.S. factories are steadily rebounding from a rough patch hit in late 2015 and early 2016. A prior decline in energy prices caused cutbacks in orders for equipment and pipelines, while a stronger dollar and slower economic growth abroad hurt exports.

The ISM manufacturing index has topped 50 for nine of the last 10 months.

New orders registered a reading of 60.2 and production improved to 60.3, evidence of greater demand for factory goods. The employment reading was a weaker but still expanding 53.1.

Of the 18 industries tracked by the report, 11 reported growth in December, including machinery, primary metals and petroleum and coal products.

Other indicators show something of a tepid rebound for manufacturers thus far.

Factory output increased a mere 0.1 percent during the 12 months ended in November, according to the Federal Reserve.

Manufacturers have responded by trimming their payrolls. The number of factory jobs fell 77,000 over the past year, according to the Labor Department.

But there are signs that factory activity could pick up steam.

Orders for industrial machinery, steel and other big-ticket rose in November, according to a Commerce Department last month.

That report showed that business investment in capital goods that are generally linked to stronger economic growth rose 0.9 percent in November, after a slight 0.2 percent rise in October. Those gains follow a 1.5 percent drop in September.