Listeria Recall: How a Web of Oversight Couldn't Prevent an Outbreak

Since the most recent recall, retailers have pulled Queseria Bendita products. While the cheese shop owners maintain that investigators have not found listeria in their cheese, but only in the Third Street facility — implying their products are safe — experts say the evidence is clear. 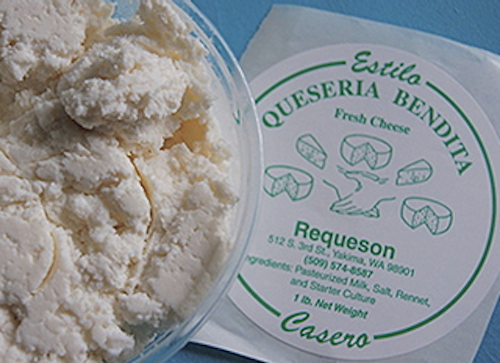 On the evening of Jan. 16 at the end of the work day, the state Department of Health issued a food-recall alert, warning that anyone who had recently purchased Queseria Bendita cheese should throw it out because of a listeria outbreak. The cheesemaker had been linked to three cases of listeriosis after the exact same genetic strain of bacteria was found in the Yakima facility.

A few days after the initial recall of panela, queso fresco and requeson cheeses, two more products appeared on the recall list: sour cream and cotija cheese. Consumers were told to trash anything with an expiration date up to April 16.

The three cases occurred in King, Pierce and Yakima counties; the death was in Pierce County. Health officials say the Yakima case occurred in the first week of December and the other two in the latter half of November. Officials first took environmental samples at the cheese shop in mid-December.

Queseria Bendita was linked to a similar outbreak five years ago, when five people were hospitalized for listeriosis in Washington and Oregon. No one died, but two pregnant women in Oregon were infected, causing premature births, Oregon health officials said at the time.

Since the most recent recall, retailers have pulled Queseria Bendita products. While the cheese shop owners maintain that investigators have not found listeria in their cheese, but only in the Third Street facility — implying their products are safe — experts say the evidence is clear.

"One of the things I'm hearing — 'Because they didn't find it in the cheese, it's not from these guys' — no, it's not true," said Dr. Scott Lindquist, the state communicable disease epidemiologist. "This is not a common strain, and to have three patients in the state have it, and to have it in this Queseria Bendita, is not a coincidence."

The case of Queseria Bendita illustrates how painstakingly difficult it can be to track down a foodborne illness and efficiently notify the consuming public of the danger: Roughly six weeks passed between the reported illnesses and the recall.

And despite new food-safety laws and multiple regulatory agencies to enforce them, inspections of high-risk food manufacturers are intermittent at best. When they do take place, the inspections may be superficial and unable to detect a culprit like listeria, which is good at hiding and not easy to eradicate.

While the family-owned company is vowing to clean up and come back, trust could be hard to regain.

Carla Hernandez, manager at Mi Pueblo Supermarket on North First Street, said she told a Bendita representative who visited the store that she can't stock the product again until the federal Food and Drug Administration sorts everything out and declares there are no more hazards. Hernandez said she must put her customers first.

"Once you lose the trust and confidence and safety, you can argue all you want, but when it comes to your health" customers don't want to gamble, she said.

The state Health Department, the first to hear about the three infected patients from medical providers, investigated the illnesses and notified the Food and Drug Administration, which took over the investigation.

The state Department of Agriculture licenses Queseria Bendita, along with 3,000 other food processors in the state, and tries to have inspectors on-site at least once a year, though there is no law requiring a certain number of visits.

Agriculture Department officials inspected the cheese shop most recently in June 2014 and November 2013, and it passed both times. Those inspections, however, are limited: Officials check that employees follow general sanitation practices and that the floors and equipment look clean.

The Agriculture Department also conducts random product sampling statewide, rotating through different food products in different weeks. Thus it may have tested Queseria Bendita cheeses in recent years, but it has no record of environmental sampling at the Yakima facility since 2010, said Kirk Robinson, assistant director of food safety and consumer services.

"Sometimes, even doing product sampling, you're not always going to catch it at that time," Robinson said. "You try to do the best you can."

The FDA has jurisdiction when a company's distribution crosses state lines, so it also inspects the food-processing side of the cheese shop. FDA guidelines say high-risk facilities — those with known safety risks and a history of foodborne illness — must be inspected at least once within the first five years of the Food Safety Modernization Act, passed by Congress in 2010, and then at least once every three years going forward. FDA did not have mandatory recall authority until passage of the act.

Records show the last time the FDA inspected Queseria Bendita was January 2011, which was within the agency's recommended guidelines.

Last week, the local health district obtained a full distribution list from Queseria Bendita. The shop sells to about 100 retailers throughout the state, including 12 in Yakima and 11 in Oregon. Yakima Health District officials have been visiting local stores since the recall to make sure the cheese has been removed, and have passed the list on to the state Health Department so it can do the same statewide.

Acting quickly is critical, Ibach said. A few years ago, a tainted product from California was recalled, and when health officials went to local stores, they found that while larger retailers knew to remove the product, smaller retailers — who had purchased it from the big ones — had no idea.

"As soon as we were notified, we pulled it all," said Craig Gaylord, owner of Fiesta Foods, which sold Queseria Bendita cheese at each of its four locations: Yakima, Sunnyside, Pasco and Hermiston, Ore.

The FDA and state and local health departments rely on the news media to get the word out quickly to retailers and consumers, issuing news releases in both English and Spanish. But if people don't read or watch the news, they're left to find out from stores or by word of mouth, unless they randomly decide to visit the agencies' recall websites.

A few retailers, including Wray's on South Third Avenue and Mi Pueblo on North First Street, said a representative of Queseria Bendita owner Venedita Montes visited after the recall, proffering a report from a Union Gap testing laboratory showing the cheese listeria-free. But the lab report states the cheese was sampled on Dec. 30, after the three people were sickened.

Sandra Aguilar, who has acted as a family spokeswoman and is Montes' daughter, did not return several calls requesting comment.

What next for the 'Blessed Cheesemaker'?

The cheese shop is supposed to retain an environmental specialist who can dictate what needs to be done to fully sanitize the facility, Lindquist said.

Every facility is different, he said, consisting of materials that require different sanitation processes, including rubber, metal and vinyl siding. The difficulty is in determining where in the manufacturing process the bacteria entered the product. The bowl? The mixer? A spoon? The walls? Pasteurization kills the bacteria in the milk, but if clean milk is poured into a contaminated bowl, it is no longer safe.

The FDA says a recall is considered "complete" only after all of the company's corrective actions are reviewed by the agency and deemed appropriate. During inspections, the agency is supposed to determine if the company's own quality controls are enough to ensure product safety.

For now, the owners of Queseria Bendita — which translates to "blessed cheesemaker" — have issued a voluntary recall and ceased production. They say they are trying to find a consultant to eradicate the listeria found in the facility.

Recalls are still problematic, because there is no system in place that notifies everyone, said Jaydee Hanson, senior policy analyst at the Center for Food Safety in Washington, D.C.

"The most important thing is for the company to be aggressively trying to track down who bought its product," he said. "The company needs to take it very seriously, or you'll have a number of people die. ... This is where you can have one employee not follow procedure and contaminate a whole lot."

Local retailers are waiting to receive an all-clear from the FDA or the state Department of Health before they consider restocking Queseria Bendita products.

Getting the cheese back on Fiesta Foods' shelves is "the furthest of our concerns," said Gaylord, the owner of the store.

"They might have damaged their reputation enough that they'll never sell again," he said.

Based on his experience with companies of all sizes, Bill Marler, a prominent Seattle attorney who has handled foodborne illness cases for more than two decades, said he wouldn't call Queseria Bendita a bad actor, as listeria is so difficult to control.

But, "Companies that produce food have a moral and legal responsibility to produce food that doesn't sicken and kill its customers," he said. "So they're responsible for what they sell."