Chips made out of broccoli, chickpeas and kale. Wine-spiked ice cream. Popcorn that didn't quite fulfill its destiny. Those were some of the alternate-universe products at last week's 61st annual Fancy Food Show. Many have limited distribution and aren't easy to find, but could signal coming trends. 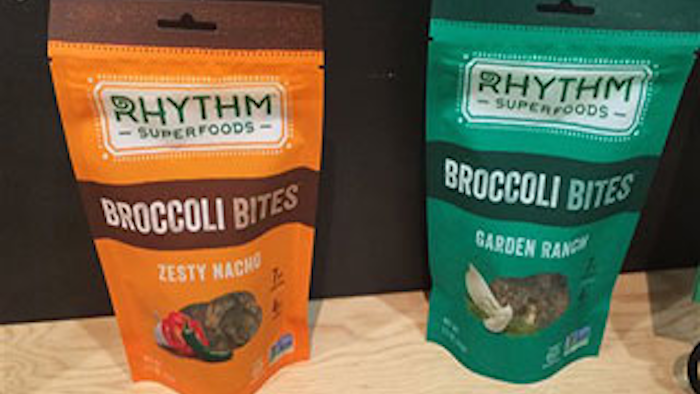 NEW YORK (AP) — Chips made out of broccoli, chickpeas and kale. Wine-spiked ice cream. Popcorn that didn't quite fulfill its destiny.

Those were some of the alternate-universe products at last week's 61st annual Fancy Food Show. Many have limited distribution and aren't easy to find, but could signal coming trends.

Buyers for places like supermarkets milled about the trade show at the sprawling Jacob Javits Center in New York City, tasting the treats on display and stuffing bags with free samples.

"It's like a secret wonderland of food," said Louise Kramer, a spokeswoman for the Specialty Food Association, the trade group that puts on the show. The expo, which featured more than 100,000 products, is not open to the public.

Here are five potential foods of the future exhibitors were showing off:

Instead of a glass, this wine can be served in a cone.

Mercer's, a dairy in upstate New York, was offering tastes of its "wine ice cream," which has up to 5 percent alcohol. The ice creams come in eight flavors including "Strawberry Sparkling" and "Chocolate Cabernet."

Roxaina Hurlburt, a co-owner of Mercer's, said the dairy has been making traditional ice cream for 60 years and started packaging the wine ice cream in 2008. She said it's sold online and in a couple of hundred locations around the country, including places like casinos and wineries.

Is maple water the next coconut water?

Drink Maple, based in Concord, Massachusetts, sells bottles of maple water it says is tapped from maple trees.

It's the same stuff that's boiled down into maple syrup, but don't expect a thick and sticky drink. The clear liquid has the consistency of water and a lightly sweetened taste, with a 12-ounce bottle labeled as having 30 calories and 7 grams of sugar. The product also seems to hit on all the prevailing dietary trends: the company's website notes maple water is "low calorie, gluten-free, dairy-free and non-GMO."

It also says "no trees are harmed" in the collection process.

The company says it's sold in about 800 stores throughout the Northeast, including at select Whole Foods and small health food stores.

Holding a bag of chips with the word "Sexy" in big letters can cure shyness. At least that's what Sexy snacks founder Robert Ehrlich told visitors to his booth.

"When you hold a bag, you are sort of empowering yourself," he says.

The most notable aspects of the snacks may be the name and Ehrlich, whose claim to fame is his founding of Pirate's Booty. Ehrlich says the snacks are a way for people to brand themselves, as they might with sneakers or handbags. The company, based in Sea Cliff, N.Y., says its products are sold in about 1,500 locations.

The popcorn comes in flavors like "Bangin' Cheddar" and "Brazilian Coconut," and the chips in flavors including "Spinach & Matcha Tea."

Do you think those half-popped kernels at the bottom of the popcorn bag are the best part? Now two companies are selling bags of just those bits.

HalfPops and Pop'd Kerns offer the snacks in different flavors, with a one-ounce serving containing between 130 and 160 calories, depending on the flavor.

HalfPops, based in Bellevue, Washington, says it uses a proprietary process to cook the kernels. Six-ounce bags of HalfPops are available online and at about 2,000 locations, including some Whole Foods and Wegman's, said Mike Watts, the company's vice president of marketing.

A prevalent theme at the expo was snacks made from unusual ingredients; think bags of roasted chickpeas, cheese puffs made out of beans, and chips made out of seaweed.

Another example that fell into that category was Broccoli Bites from Rhythm Foods, which also makes kale chips. Before they're dehydrated, the broccoli is tossed in a dressing made with seeds, herbs and spices to add flavor and prevent crumbling. Each 1.5-ounce bag has 150 calories.

Even though kale has surged in popularity in recent years, Rhythm Foods CEO Scott Jensen said he expects the broccoli snacks to be a lot easier to explain and sell to buyers.

And he's already working the next vegetable snack: cauliflower.

Many of the positions will be in technical and engineering roles.
May 13th, 2022
Follow Us
Most Recent