With the aid of Japan, Myanmar is building an expansive factory park in hopes to develop the Yangon region and its crumbling, pre-World War II infrastructure in Myanmar. Plans call for the zone to eventually employ nearly 300,000 people, mostly in manufacturing. 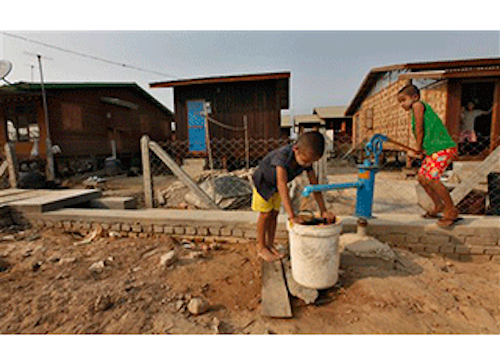 THILAWA, Myanmar (AP) — Tin Hsan and her husband lived modestly in the outskirts of Myanmar's commercial capital Yangon, growing rice and betel leaves on their 22 acres and peddling vegetables, but they got by, until they were forced to move to make way for Thilawa, a showcase industrial zone being built with Japanese aid.

The expansive factory park is part of plans to develop the Yangon region and its crumbling, pre-World War II infrastructure as Myanmar rushes to shift from subsistence farming to export manufacturing following sweeping political and economic reforms that ended outright rule by the military.

Critics, however, say the landmark project is pushing families deeper into poverty, and accuse local officials of strong-arm tactics to force resettlements, highlighting the dilemmas faced by Myanmar's fledgling democracy as foreign businesses and development groups pour into the country.

Japan International Cooperation Agency and several big Japanese companies have a combined 49 percent stake in the 2,400-hectare (5,900-acre) special economic zone, which is Japan's biggest investment in Myanmar so far.

Many of the people forced to move from farms to tiny plots of land outside the area designated for the industrial zone may eventually get jobs in the factories expected to set up in Thilawa. But in the meantime conditions are bleak.

"My husband is a farmer and he only knows how to work in the field. Since he has no work to do, he became depressed and is now drinking day and night," said Tin Hsan, standing outside their rickety, one-room hut that fills a barren roadside lot. "Since we moved here and live in this small place with no space to grow anything, we are living hand to mouth and we are all miserable."

Tin Hsan and her husband are one of 81 households, or about 300 people, moved between 4.5 kilometers and 8 kilometers so far. Local residents and their advocates say that in the rush to meet deadlines, residents were forced to sign agreements for new housing and compensation that fell far short of their needs and also violated JICA's requirement that resettlement not result in lower living standards. More than 4,500 will be resettled for the second phase of construction.

Plans call for the zone to eventually employ nearly 300,000 people, mostly in manufacturing. Since construction began in late November, a Japanese contractor has raised and leveled 400 hectares (990 acres) of land near a port built in the 1990s that will be expanded. During a recent visit, workers were putting the finishing touches on a prefabricated building that will serve as the zone's headquarters.

"There's so much speculative capital looking for somewhere to go. Thilawa is looking like the best bet for an industrial park so that land prices are going up," said Rachel Calvert of consultancy IHS. "The amount of interest in Thilawa is huge."

Thilawa is promising ample, stable electricity and good quality water piped in from a reservoir up country. Since other industrial zones in and around Yangon are full and lack stable electricity, companies are lining up to get in, said Calvert.

Yet satisfying the priorities of foreign investors and local businesses comes at a high cost for those uprooted. They are unhappy over the disruptions to their lives, loss of livelihoods, the amount of compensation provided, and most acutely over the silty orange water available to their new homes.

Tin Hsan and her husband received about 28 million kyat ($29,000) in compensation, a sum that is a small fortune in Myanmar but which was quickly dissipated and also shortchanged them by paying out for only 13 of their 22 acres. Without farmland to provide food and an income, the extended family of four sons and a dozen grandchildren was forced apart. Tin Hsan said they spent about $5,000 to build their new house and split the remaining money between their children.

"Maybe the residents' homes were old, but they were spacious. Now they have new homes, but they're cramped and surrounded by water when it rains. The houses are full of cracks," Michihiro Ishibashi, a Japanese lawmaker who recently visited to investigate, told a parliamentary committee earlier this month.

Officials at JICA, the Japanese aid organization with a 10 percent stake in Thilawa, acknowledge problems with the resettlement effort but insist the project conforms to its own and to other international aid standards.

It said it is working with the local government to try to resolve the problems. The muddy water supply may partly stem from the haste in which the wells were installed, JICA said.

"Resettlement is a tremendous burden and many of the project-affected persons are still struggling," Takuro Takeuchi, a JICA advisor, said in an interview at the agency's headquarters in Tokyo. But ultimately, he said, "It's the Myanmar government that has to settle the situation."

In April, JICA went ahead with loans for Thilawa despite an environmental impact assessment showing 11 areas of likely negative impact and nine needing further study, compared with only six categorized as neutral or positive.

JICA's rules call for the host governments of projects it funds to ensure residents can improve or at least maintain their living standards. Meeting that benchmark appears daunting given the hard-scrabble conditions prevailing around Yangon and the limited resources available in one of the poorest countries in Asia.

Activists working with Thilawa residents say those resettled were told they had no choice. Despite Myanmar's recent democratic reforms, most citizens remain wary of protest and unaware of their rights after decades of authoritarian, repressive rule.

"The people in Thilawa continue to suffer, but the Myanmar government isn't listening and JICA isn't listening. They don't seem to care that the project is violating their own guidelines," said U Mya Hlaing, leader of the Thilawa Social Development Group, which represents local residents.

The zone began auctioning off shares in the project in early March, for 10,000 kyat per share, with a target of selling 2 million shares, and reported it took in 40 billion kyat ($41 million), nearly twice the amount expected.

Sales of factory sites began May 19.

"From autumn to next year, we will see the highest quality infrastructure in Myanmar," said U Win Aung, chairman of the Union of Myanmar Federation of Chambers of Commerce and Industry.

"You have nothing to worry about," he told a Japanese business mission.