The company revealed its plans to invest about $30 million to transform two historic buildings into the production facility and tourist attraction along a stretch of downtown Louisville that was known as "Whiskey Row" from the city's liquor-making heyday. 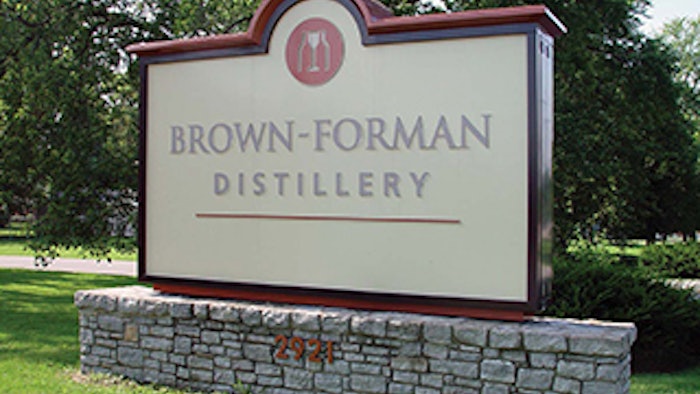 The company revealed its plans Thursday to invest about $30 million to transform two historic buildings into the production facility and tourist attraction along a stretch of downtown Louisville that was known as "Whiskey Row" from the city's liquor-making heyday.

The Old Forester Distillery is expected to open in fall 2016.

It continues a revival of bourbon-making in downtown Louisville, where whiskey production dates to the late 1700s.

"As demand for high-quality bourbon continues to increase, the Old Forester Distillery will enable us to expand capacity," Brown-Forman CEO Paul Varga said in a statement.

Old Forester bourbon is now produced at a Brown-Forman distillery in Shively, southwest of downtown Louisville.

The new distillery will allow the company to double current production of the venerable brand. Old Forester had double-digit revenue growth in the past fiscal year, with more than 100,000 cases sold, the company said.

The company's founder, George Garvin Brown, introduced Old Forester more than 140 years ago. The brand was popular into the 1960s but went into a decline in the 1970s that lasted for several decades.

Louisville-based Brown-Forman purchased the two buildings for the new operation. The buildings, built around 1857, were used for warehousing barrels of whiskey produced at numerous distilleries in the area.

One of the structures being converted into the new distillery was occupied by Brown-Forman from 1900 to 1919.

"We're returning to our roots with the distillery," said George Garvin Brown IV, a fifth-generation descendant of the company's founder and the current board chairman.

The company will renovate the buildings and purchase equipment. The distillery will include fermentation, distilling, barrel making and bottling operations, Brown-Forman said. The facility will be open to tours and will feature a tasting room, exhibits and bourbon-making demonstrations.

Brown-Forman will potentially receive up to $1.3 million in tax incentives in return for the venture.

The company is expected to create up to 20 new jobs with the distillery and tourist attraction, Gov. Steve Beshear's office said.

Beshear said the venture will "help grow sales and exports for a Kentucky product that is increasingly in demand across the globe."

The investment comes amid surging growth for bourbon, one of Kentucky's signature industries. Kentucky distillers have invested more than a half-billion dollars in expansions and startups since 2012, according to the Kentucky Distillers' Association.

Last year, the state's distilleries filled 1.2 million barrels of bourbon — the most since 1970, the group said.

Inventory has topped 5 million barrels for the first time since 1977 in a state where aging bourbon barrels outnumber people.

Production has surged by more than 150 percent in the past 15 years in Kentucky — home to 95 percent of the world's bourbon production.

Bourbon tourism also is making a big splash. More than 570,000 people visited the Kentucky Bourbon Trail last year, up 15 percent from the prior year.