Chobani: Mold in Yogurt Does Not Carry Disease

Yogurt maker Chobani said the mold that triggered a recall of some of its Greek yogurt cups this week is not associated with foodborne illnesses like salmonella or E. coli. The company identified the mold as Mucor circinelloides, a common species that usually affects fruits, vegetables and other plants. 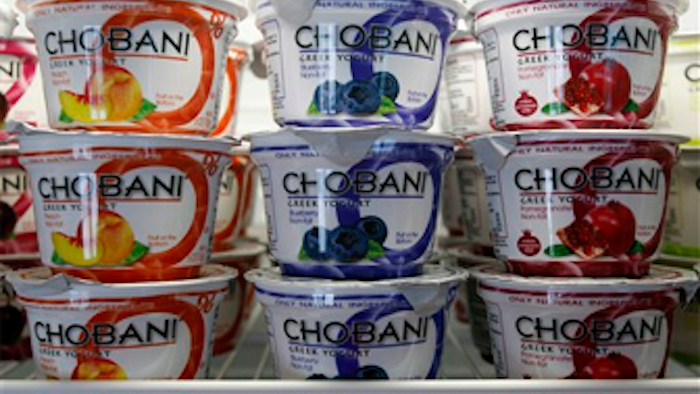 WASHINGTON (AP) — Yogurt maker Chobani said Friday that the mold that triggered a recall of some of its Greek yogurt cups this week is not associated with foodborne illnesses like salmonella or E. coli.

The company identified the mold as Mucor circinelloides, a common species that usually affects fruits, vegetables and other plants. It has also been linked to previous cases of spoiled yogurt.

Cornell University Professor Randy Worobo said on a conference call arranged by Chobani that the mold "should not pose a health risk to most consumers." Worobo is a professor of food science at the university's college of agriculture.

Worobo did not test or identify the mold, but agreed to speak as a food safety expert, according to a media spokesman for Cornell University. The university spokeman said he was not paid and has no financial ties to the company.

Worobo said plants typically absorb the mold from surrounding soil, though it can also be found in processing plants. It can grow on yogurt only when it is kept above refrigeration levels.

"It would take hours or days of temperature abuse to result in visible mold growth," Worobo said.

Chobani spokeswoman Nicki Briggs said the company is still investigating how the yogurt became contaminated. She added that there was no evidence of mold on the products when they left the company's facility.

Chobani formally recalled more than a half-dozen yogurt varieties on Thursday, a week after it first started asking retailers to pull the products from shelves, saying some cups were "swelling and bloating." The products have the code 16-012 and expiration dates Sept. 11 to Oct. 7.

Greek yogurt in general has surged in popularity as well, with fans saying they prefer its thicker consistency and relatively higher protein content when compared with the sweeter yogurt varieties that have long been sold in American supermarkets.

The private company had an estimated $244 million in revenue in 2010, according to S&P Capital IQ.

Chobani says customers with the affected code dates should contact its customer service team at care@chobani.com to get replacement products.