Denzel Washington's character in "Flight" drinks a lot throughout the film, but his portrayal of a highly functioning alcoholic pilot isn't going down well with brewing company Anheuser-Busch or the distributor of Stolichnaya vodka. Anheuser-Busch said Monday that it has asked Paramount Pictures Corp. to obscure or remove the Budweiser logo from the film. 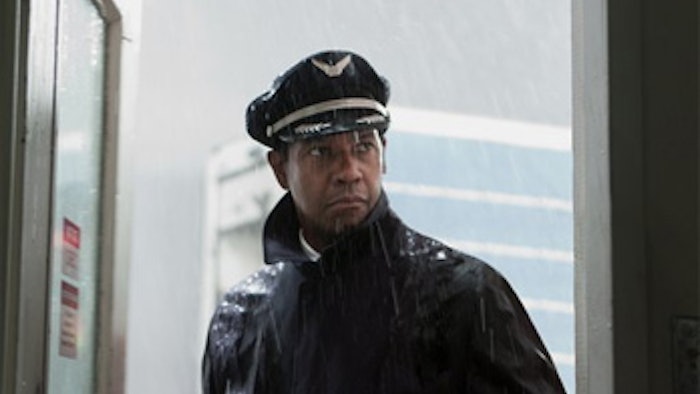 LOS ANGELES (AP) — Denzel Washington's character in "Flight" drinks a lot throughout the film, but his portrayal of a highly functioning alcoholic pilot isn't going down well with brewing company Anheuser-Busch or the distributor of Stolichnaya vodka.

Anheuser-Busch said Monday that it has asked Paramount Pictures Corp. to obscure or remove the Budweiser logo from the film, which at one point shows Washington's character drinking the beer while behind the wheel.

Budweiser is hardly the only alcoholic beverage shown in "Flight," which earned $25 million in its debut weekend and is likely to remain popular with audiences. Washington's character frequently drinks vodka throughout the film, with several different brands represented. William Grant & Sons, which distributes Stolichnaya in the United States, also said it didn't license its brand for inclusion in the film and wouldn't have given permission if asked.

Although product placement, where companies pay producers to have their brands seen on-camera, have become ubiquitous in movies and television, experts say studios are not obligated to get permission before featuring a product in their work.

Rob McCarthy, vice president of Budweiser, wrote in a statement to The Associated Press that the company wasn't contacted by Paramount or the production company of director Robert Zemeckis for permission to use the beer in "Flight."

"We would never condone the misuse of our products, and have a long history of promoting responsible drinking and preventing drunk driving," McCarthy wrote. "We have asked the studio to obscure the Budweiser trademark in current digital copies of the movie and on all subsequent adaptations of the film, including DVD, On Demand, streaming and additional prints not yet distributed to theaters."

A spokesman for Zemeckis referred questions to Paramount, which did not return an email message seeking comment.

James Curich, a spokesman for Stoli distributor William Grant & Sons, said the company has a strict code for how the vodka is portrayed in films and is committed to marketing it responsibly. "Considering the subject matter of this film, it is not something in which we would have participated," he wrote in an email.

Despite the companies' dissatisfaction with their inclusion in the film, experts say there is little they can do about it legally.

Trademark laws "don't exist to give companies the right to control and censor movies and TV shows that might happen to include real-world items," said Daniel Nazer, a resident fellow at Stanford Law School's Fair Use Project. "It is the case that often filmmakers get paid by companies to include their products. I think that's sort of led to a culture where they expect they'll have control. That's not a right the trademark law gives them."

Jay Dougherty, a professor at Loyola Law School, said the use of brands in films has generally been protected by the courts, even when the companies aren't pleased with the portrayals.

"It wouldn't have been as effective a film if they used a bunch of non-generic brands," said Dougherty, who is also the director of the school's Entertainment & Media Law Institute. "In a normal situation, if the alcohol were just there as a smaller part of the movie, they might have created an artificial brand for it."

Other vodka brands, including Absolut and Smirnoff, are also included in the film. Representatives of those companies did not return messages seeking comment.

Paramount has some experience with a company upset with its inclusion in a film. In 2003 the studio won a case after the makers of the "Slip 'N Slide" sued over the use of the product in the film "Dickie Roberts: Former Child Star."

In that case, a court found that requiring Paramount to alter the film and its marketing would "generate more hardship than it alleviates."

Dougherty and Mark Partridge, a Chicago intellectual property lawyer, also noted that a court rejected an effort to get by Caterpillar Inc. to get its logo removed from tractors driven by the villains in 2003's "George of the Jungle 2." The company had argued its trademark was harmed by having its product associated with the film's villains.

Partridge said with the explosion of product placement in recent years, a company might try to make an argument that by the brand appearing in a film, the audience assumed it had granted permission. "You'd have to have proof that people actually making an association and believing it was authorized," he said.

"It might be a different world," he said, adding, "I still think it's an uphill haul."