Scientists in Zimbabwe say a fresh water crayfish brought from Australia is breeding out of control in the northern Lake Kariba, devouring the food sources of other fish and putting the nation's entire aquatic ecosystem at risk. Officials at the Zimbabwe University lakeshore research station say the red claw crayfish, introduced a decade ago for a fish farming project, has no natural predators in the wild. 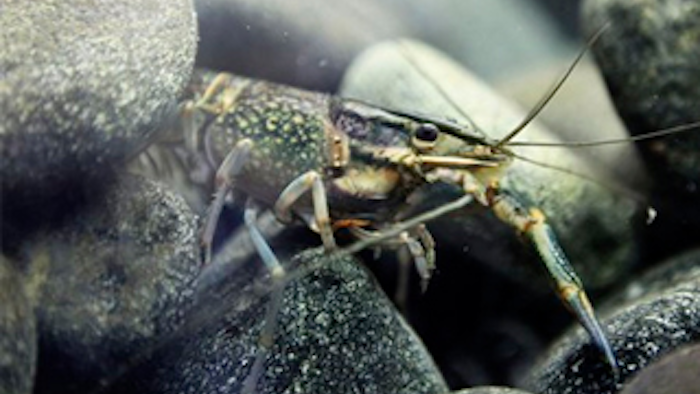 HARARE, Zimbabwe (AP) — Scientists in Zimbabwe say a fresh water crayfish brought from Australia is breeding out of control in the northern Lake Kariba, devouring the food sources of other fish and putting the nation's entire aquatic ecosystem at risk.

Officials at the Zimbabwe University lakeshore research station say the red claw crayfish, introduced a decade ago for a fish farming project, has no natural predators in the wild — crocodiles don't like them — and they produce clusters of eggs up to half the size of a tennis ball that hatch prolifically.

Baby crocodiles still feeding on insects have been observed eating the crayfish, as have Lake Kariba's piranha-like tiger fish, but they generally thrive in deeper water than the crayfish.

Chief ecologist Crispen Phiri said the exploding, migrant crayfish population is infesting rivers, dams, ponds and tanks much farther afield where "the scavenger eats everything —rotting vegetation, anything organic and micro-organisms" that other aquatic life and fish need.

The red claw crayfish, scientifically Cherax Quadricarinatus and known colloquially in Australia as the yabby, is robust and hardy and cannot be poisoned without killing other natural species, Phiri said.

It survives and multiplies in virtually any fresh water supply and though its flesh is high in protein it is not popular in the diet of ordinary Zimbabweans, even those facing food shortages in the troubled economy.

Phiri said it is not clear whether the sister crayfish, or Cherax Destructor, is infesting Lake Kariba, too. As its scientific name suggests, it is a burrower which can cause structural damage to drainage and hydroelectric installations in Kariba, one of the world's largest manmade lakes stretching about 300 kilometers (200 miles) on the Zambezi River along the northern border with neighboring Zambia.

Like professionals in most Zimbabwean institutions, the scientists are suffering acute shortages of funding. The station's only research vessel has been docked for more than five years awaiting cash for repairs. What the ecologists do know is that the red claw migrates deep into river systems.

"We have to do a lot more work on the crayfish invasion," Phiri told The Associated Press.

"We don't know yet what will happen to the ecosystem. It is an omnivore and eats detritus, rotting vegetation, dead fish, the eggs of bream and other aquatic life as well as all the organisms that are crucial in the whole ecological chain," he said.

Nor is it known exactly how many crayfish are in Kariba lake. Phiri says they are most visible breeding unchecked close to human settlements, harbors and slipways for boats. Kariba's "kapenta" fish, a tiny tropical whitebait or sardine that has become a staple food, was also introduced into the lake but does not migrate because it only lives in deep water lake conditions.

The red claw from Australia was first "farmed" in neighboring Zambia but has already found its way deep into that country's lake tributaries where its worrying impact is also being urgently tracked.

The solution to the crayfish crisis, said Phiri, seems to lie in commercial exploitation in traps similar to those used to catch marine lobster.

In stores in Harare, it sells for $9 a kilogram (2.2 pounds), $12 still alive in fish shop aquariums, and far more in upmarket restaurants patronized by the wealthy well-traveled elite and Zimbabwe's growing Chinese community.

Neighboring South Africa has banned commercial operations and breeding of the still water crustacean in Argentina, Mexico and Australia is strictly controlled for environmental reasons.

"We don't have the resources on the ground to license or police exploitation on the right scale at Kariba," said Phiri. "The important thing is we don't want people to introduce it elsewhere."