A Wisconsin Gouda won top honors Wednesday night at the 2013 U.S. Championship Cheese Contest, edging out entries from Vermont and Illinois. Marieke Penterman, of Holland's Family Cheese in Thorp, Wis., won the two-day competition in Green Bay with her Marieke Mature Gouda. Out of a possible 100 points, Marieke Gouda scored 98.31 in the final round of judging. 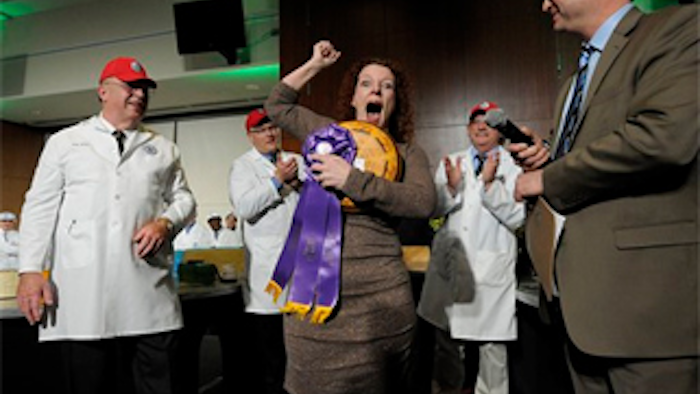 Marieke Penterman, of Holland's Family Cheese in Thorp, Wis., won the two-day competition in Green Bay with her Marieke Mature Gouda. Out of a possible 100 points, Marieke Gouda scored 98.31 in the final round of judging.

First runner-up, with a score of 97.89, was Tarentaise, a semi-hard alpine cheese made by Spring Brook Farm/Farms For City Kids Foundation in Reading, Vt. Second runner-up was Medium Cheddar, made by Team Cracker Barrel Natural Cheese, Agropur Weyauwega for Kraft Foods in Glenview, Ill., which scored 97.88.

Judges re-evaluated the top 16 cheeses at an evening gala to determine the overall winner.

"Every medalist should be extremely proud of being recognized as the best of the best in the largest national cheese competition ever held," said John Umhoefer, executive director of the Wisconsin Cheese Makers Association, which hosts the biennial competition.

More than 1,700 cheeses were entered, including pepper-flavored, smoked and sheep cheeses. This year, more than 30,000 pounds of cheese were entered in the contest.

Wisconsin captured the most gold medals, with 47 of the 81 categories judged. Vermont and New York came in second, with six gold medals each. Oregon had four gold medals, while California, Idaho, Illinois and Ohio each took three. Colorado, Michigan, Minnesota, Missouri, New Mexico and Utah each captured one apiece.

The biennial event has been held at Lambeau Field since 2009. Organizers say this year's number of entries is a record.