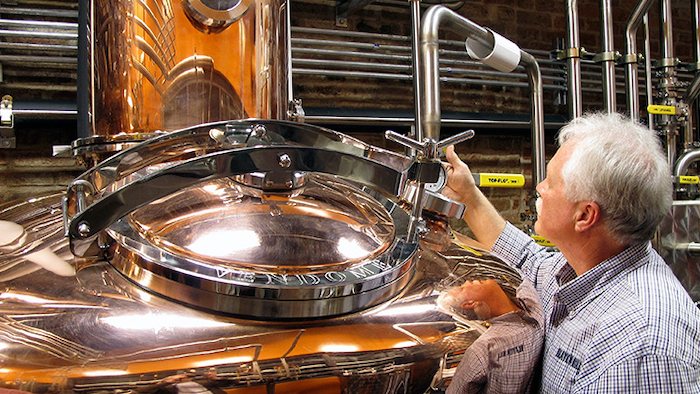 LOUISVILLE, Ky. (AP) — Until recently, whiskey tourists in Kentucky had been allowed to sniff the aromas of bourbon-making and sip the finished product during distillery tours. But they couldn't legally ship bottles home.

That modern-day prohibition came to an end earlier this year but was officially celebrated on Friday, when Gov. Matt Bevin and other state officials presided over the ceremonial first shipments.

Kentucky produces about 95 percent of the world's bourbon, and tourism targeting the spirit has become big business. The ability to ship whiskey bottles home after a tour is expected to boost sales at distilleries both large and small.

Industry leaders see it as a part of the experience. Many bourbon fans catch flights into the region and visit distilleries to experience a slice of Kentucky culture.

"Most all of them want to ship their bottles home as a matter of convenience versus lugging them back," said Rob Samuels, chief operating officer at Maker's Mark.

A common question during tours is: "Can I ship bottles home?" Until the recently enacted law took effect, the answer was "no."

"We have so many people that want bottles shipped, and it's been very distressing to our visitors when we have had to say, 'Oops, sorry we can't ship 'em," said Peg Hays, president of Casey Jones Distillery at Hopkinsville, near the Tennessee border.

Bevin signed the law in April, but regulators and distillery operators have needed some time to work out the details before it could be put into practice. Distillers hope that shipments will officially start making their way to customers soon.

While bottle shipments are expected to boost sales across the board, small distillers could be the biggest beneficiaries, said Hays, whose distillery is known for its moonshine whiskies.

The shipments will allow the newcomers to reach new markets, she said.

"We don't have the huge distribution that the big guys do," Hays said in a phone interview. "It's very difficult as a small, craft distillery to get ... a distributor to even look at you. This would help overcome that economic disparity when we can ship."

But for now, there are limits to where Kentucky whiskey can be shipped.

Visitors can only ship bottles if the destination state allows alcohol shipments and the location isn't in dry territory, said Eric Gregory, president of the Kentucky Distillers' Association.

Under Kentucky's law, distillery sales for shipment must be made in person. Each visitor can ship up to 4.5 liters of spirits — which is six standard-sized bottles — per day. Taxes are paid on all transactions. Shippers such as UPS can transport the alcohol, provided they have proper licenses.

The law also allows bourbon fans to sign up for "Clubs of the Month" that distilleries can sponsor, enabling people to receive shipments of Kentucky spirits throughout the year.

Kentucky distillers hope the state's new shipping law will spread to other states. Gregory said officials in a number of states have expressed interest.