Aquaculture Project Could Lift Status Of US Salmon Farming

A Norwegian firm's plan to build one of the world's largest inland salmon aquaculture facilities in Maine has a chance to raise American salmon farming's status on the international stage, people who follow the industry say. 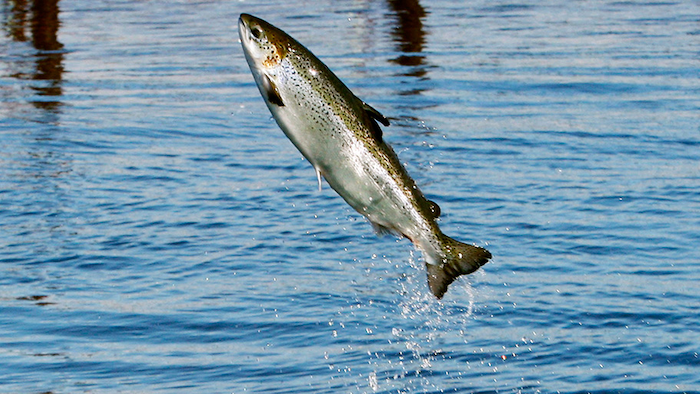 PORTLAND, Maine (AP) — A Norwegian firm's plan to build one of the world's largest inland salmon aquaculture facilities in Maine has a chance to raise American salmon farming's status on the international stage, people who follow the industry say.

Nordic Aquafarms wants to build a facility that would produce more than 60 million pounds of salmon per year. The state typically produces between 18 and 35 million pounds of the fish per year, and production has ebbed and flowed, said Sebastian Belle, executive director of the Maine Aquaculture Association.

Maine is the biggest producer of farmed Atlantic salmon in the U.S., but the U.S. is a relatively minor player in the worldwide industry. Potentially doubling the state's production capacity would significantly alter the landscape.

"They are taking a big risk, a big chance. Time will tell whether or not they are going to be successful," Belle said. "They are certainly very confident in their ability to do so."

Norway, Scotland, Chile and Canada produced more than 90 percent of the world's approximately 4.4 billion pounds of Atlantic salmon farmed in 2012. The Nordic project wouldn't raise the U.S. industry to the stature of those countries. But Erik Heim, chief executive officer of Nordic, said his proposal to use a different kind of farming system than many of his competitors sets the project apart.

The Nordic facility would use land-based tanks. Salmon farmers in Maine and New Brunswick, Canada, rely heavily on a different model that raises the fish in pens in the ocean.

"Land-based production is in rapid development and our view is that is has a role to play in both the future global and US seafood supply equation," Heim said.

Maine's salmon farming has had ups and downs over the years, including a 2003 ruling in an environmental lawsuit that brought expensive new rules and saw some companies pull out of the state. Into that void stepped New Brunswick-based Cooke Aquaculture, which also farms in Canada and now dominates Maine's fish farming industry.

A spokesman for Cooke declined to comment on the Nordic proposal.

The state's combined salmon farms produced about 24.5 million pounds of the fish in 2010, the most recent year for which state statistics are available. Environmentalists believe the annual total has decreased in recent years because of problems with pests, including sea lice.

But the same environmental groups that are often critical of salmon aquaculture have shown some support for the Nordic project. The land-based tank model avoids the problem of escaped farmed fish entering the marine environment, said Neville Crabbe, spokesman for the Atlantic Salmon Federation.

"The best way to mitigate the impacts of salmon aquaculture on wild salmon is to separate the two," he said.

The Nordic facility would be located on 40 acres in Belfast, about 100 miles up the coast from Portland. The project needs a battery of approvals. Heim said he hopes to be in production by 2020.