In a Mideast Upset by Cheap Oil, More Crude May Enter Market

Across a Mideast fueled by oil production, low global prices have some countries running on empty and scrambling to cover shortfalls, even as more regional crude is on tap to enter the market. 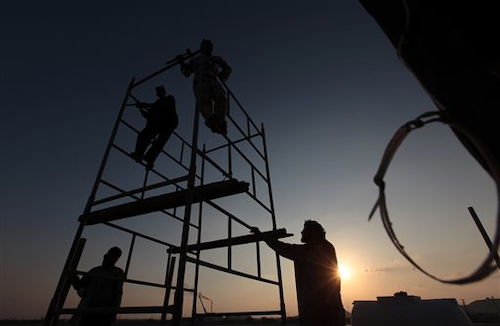 DUBAI, United Arab Emirates (AP) — Across a Mideast fueled by oil production, low global prices have some countries running on empty and scrambling to cover shortfalls, even as more regional crude is on tap to enter the market.

While some Gulf nations rest on ample reserve funds, embattled Iraq is desperate to scrounge up more money for its fight against the extremist Islamic State group as protesters demand repairs to its failing power grid. Contrast that to neighboring Iran, whose nuclear deal with world powers positions it to re-enter the global oil market and make long-needed repairs to its fields to increase its daily production.

The possibility of more supply entering the market has analysts already lowering their forecast price for oil into the next year. And even if the price rises, industry experts say U.S. production quickly could ramp up and keep prices low for years to come, challenging the power of OPEC.

"There's almost no way that OPEC can get the band back together," said Greg Priddy, the director for global energy and natural resources at the Eurasia Group. "You can't get prices rapidly back up ... because you'd get runaway growth in the U.S."

Fluctuating oil prices are nothing new to the Mideast, such as the drop in prices in the 1980s following the 1970s oil crisis in the U.S. This time around, as global prices have fallen by more than 50 percent since the middle of last year, countries like the United Arab Emirates, Qatar and Kuwait have large cash reserves to cushion the blow. Many in the Gulf also have diversified their economies.

But even those with significant reserves could see new exploration projects and drilling halted in their countries. In January, Royal Dutch Shell PLC announced it would halt its planned Al Karaana petrochemicals project in Qatar, which would have been owned 80 percent by state-run Qatar Petroleum and 20 percent by Shell. It blamed falling energy prices.

Despite the price downturn, oil-powerhouse Saudi Arabia declined to lower its oil production and continues to spend government money on its extensive subsidy programs. But while the International Monetary Fund in June warned the kingdom faced a deficit of around 20 percent of the country's gross domestic product, it still has billions of dollars in reserves it can burn through, even as it conducts a costly war in neighboring Yemen.

For Iraq, which lost about a third of its territory to the Islamic State group last year, things are much more serious as oil revenue accounts for nearly 95 percent of all government spending. The country's $102.5 billion budget ran a deficit of about $21.4 billion in August. Meanwhile, Iraq's autonomous Kurdish region now sells oil independently from the central government.

"Iraq is facing a double shock arising from the ISIS insurgency and the plunge in global oil prices," the IMF wrote in August, using an alternate acronym for the Islamic State group. "The risks remain very high, emanating from an extension of the conflict, political tensions, weak policy implementation and further shocks from oil markets."

In neighboring Iran, the Islamic Republic is preparing for economic sanctions to be lifted as part of a deal with world powers in exchange for limiting its nuclear program. Analysts estimate Iran has as much as 30 million barrels of oil ready to enter the market in floating storage. After taking care of needed repairs to its oil fields halted by the sanctions, experts say it could add upward of 4 million barrels of oil a day to global production.

"Absent a rise in global demand, an increase in supply of this magnitude would inevitably depress prices," ratings agency Moody's Investors Service said in July.

Another supply wild card is Libya. Oil production fell dramatically in the 2011 civil war that saw longtime dictator Moammar Gadhafi killed. In the time since, the country has been split between warring militias and rival governments, but a possible peace deal could see production ramp back up to as much as 1 million barrels of crude oil a day, Citi Investment Research said Tuesday.

And even if prices drop, Moody's warns that Iraq and Saudi Arabia likely would increase their production to try to make up for the lost cash — further adding to global supply and likely keeping prices low. That puts additional pressure on the 12 members of OPEC ahead of the cartel's next meeting.

"The world is still going to be oversupplied through 2016 and it's not going to be until 2017 that you actually have the bloated inventories come down," said Priddy of the Eurasia Group.