The Environmental Protection Agency has dramatically lowered its estimate of how much of a potent heat-trapping gas leaks during natural gas production, in a shift with major implications for a debate that has divided environmentalists. 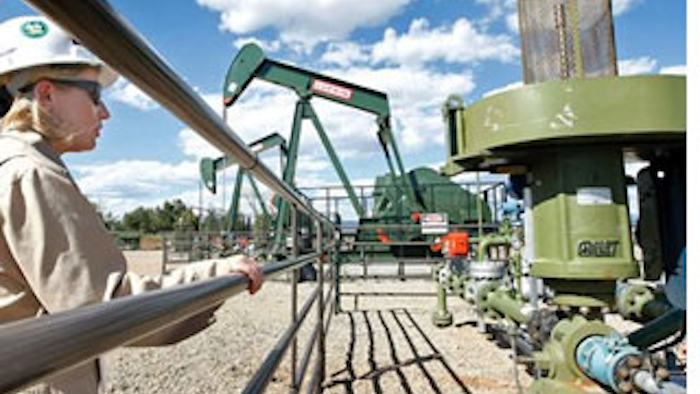 PITTSBURGH (AP) — The Environmental Protection Agency has dramatically lowered its estimate of how much of a potent heat-trapping gas leaks during natural gas production, in a shift with major implications for a debate that has divided environmentalists: Does the recent boom in fracking help or hurt the fight against climate change?

Oil and gas drilling companies had pushed for the change, but there have been differing scientific estimates of the amount of methane that leaks from wells, pipelines and other facilities during production and delivery. Methane is the main component of natural gas.

The new EPA data is "kind of an earthquake" in the debate over drilling, said Michael Shellenberger, the president of the Breakthrough Institute, an environmental group based in Oakland, Calif. "This is great news for anybody concerned about the climate and strong proof that existing technologies can be deployed to reduce methane leaks."

The scope of the EPA's revision was vast. In a mid-April report on greenhouse emissions, the agency now says that tighter pollution controls instituted by the industry resulted in an average annual decrease of 41.6 million metric tons of methane emissions from 1990 through 2010, or more than 850 million metric tons overall. That's about a 20 percent reduction from previous estimates. The agency converts the methane emissions into their equivalent in carbon dioxide, following standard scientific practice.

The EPA revisions came even though natural gas production has grown by nearly 40 percent since 1990. The industry has boomed in recent years, thanks to a stunning expansion of drilling in previously untapped areas because of the use of hydraulic fracturing, or fracking, which injects sand, water and chemicals to break apart rock and free the gas inside.

Experts on both sides of the debate say the leaks can be controlled by fixes such as better gaskets, maintenance and monitoring. Such fixes are also thought to be cost-effective, since the industry ends up with more product to sell.

"That is money going up into the air," said Roger Pielke Jr., a professor of environmental studies at the University of Colorado, adding he isn't surprised the EPA's new data show more widespread use of pollution control equipment. Pielke noted that the success of the pollution controls also means that the industry "probably can go further" in reducing leaks.

Representatives of the oil and gas industry said the EPA revisions show emissions from the fracking boom can be managed.

"The methane 'leak' claim just got a lot more difficult for opponents" of natural gas, noted Steve Everley, with Energy In Depth, an industry-funded group.

In a separate blog post, Everley predicted future reductions, too.

"As technologies continue to improve, it's hard to imagine those methane numbers going anywhere but down as we eagerly await the next installment of this EPA report," Everley wrote.

"We need a dramatic shift off carbon-based fuel: coal, oil and also gas," Bill McKibbern, the founder of 350.org, wrote in an email to The Associated Press. "Natural gas provides at best a kind of fad diet, where a dangerously overweight patient loses a few pounds and then their weight stabilizes; instead, we need at this point a crash diet, difficult to do" but needed to limit the damage from climate change.

The EPA said it made the changes based on expert reviews and new data from several sources, including a report funded by the oil and gas industry. But the estimates aren't based on independent field tests of actual emissions, and some scientists said that's a problem.

Robert Howarth, a Cornell University professor of ecology who led a 2011 methane leak study that is widely cited by critics of fracking, wrote in an email that "time will tell where the truth lies in all this, but I think EPA is wrong."

Howarth wrote that the EPA seems "to be ignoring the published NOAA data in their latest efforts, and the bias on industry only pushing estimates downward — never up — is quite real. EPA badly needs a counter-acting force, such as outside independent review of their process."

The issue of methane leaks has caused a major split between environmental groups.

Since power plants that burn natural gas emit about half the amount of the greenhouse gases as coal-fired power, some say that the gas drilling boom has helped the U.S. become the only major industrialized country to significantly reduce greenhouse emissions. But others believe the methane leaks negate any benefits over coal, since methane is a highly potent greenhouse gas.

But the EPA estimates that all the sources of methane combined still account for only 9 percent of greenhouse gases, even taking into account methane's more potent heat-trapping.

The EPA said it is still seeking more data and feedback on the issue of methane leaks, so the report may change again in the future.

The EPA revisions have international implications, too. The agency says the new report, Inventory of U.S. Greenhouse Gas Emissions and Sinks, was submitted to the U.N. Framework Convention on Climate Change by an April 15 deadline.