On Labor Day 2014, workers in Northeastern Pennsylvania faceed a job market that has changed considerably over the past several years, while some employers say they can't find new hires with the skills and work habits they need. The mismatch is reflected in an unemployment rate that, while down substantially since the end of the Great Recession, has remained the highest in the state for more than four years. 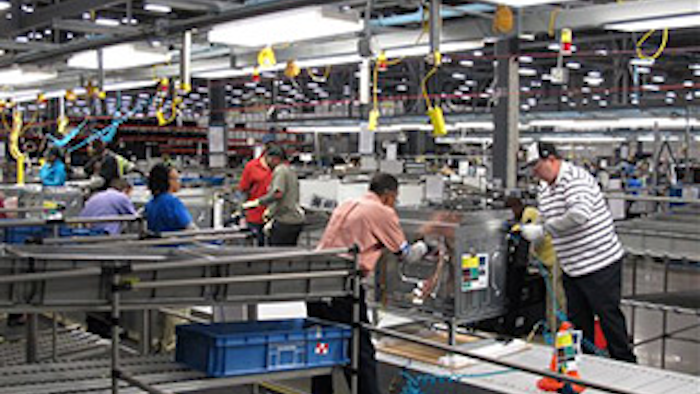 WILKES-BARRE, Pa. (AP) — On Labor Day 2014, workers in Northeastern Pennsylvania faceed a job market that has changed considerably over the past several years, while some employers say they can't find new hires with the skills and work habits they need.

The mismatch is reflected in an unemployment rate that, while down substantially since the end of the Great Recession, has remained the highest in the state for more than four years.

In the 10 years since June 2004, the total number of jobs available in the Scranton/Wilkes-Barre labor market declined by nearly 2 percent, according to figures kept by the state Department of Labor and Industry. There's been an important shift over the same time period, as jobs in the goods-producing sector fell by 7,300 while service-providing positions rose by 4,100.

That's meaningful because goods-producing jobs, such as in manufacturing and construction, generally pay more and come with better benefits.

According to the federal Bureau of Labor Statistics, Luzerne County workers in goods-producing jobs were paid an average of $918 a week in the first quarter of 2013, the latest figures available. That was 35 percent more than the $679 weekly average in the dominant service-providing sector.

Both wages were slightly lower in Lackawanna County, while salaries in the region generally lag national averages by 20 percent to 40 percent.

After falling steadily, the local goods-producing job count has stabilized in recent months, while the service sector has slid.

Ron Maloney, president of economic development agency Penn's Northeast, wants to attract more manufacturing to the region and has identified "companies that could take advantage of our resources and our position" to build on the local area and the surrounding markets.

On his list are food processing, pharmaceuticals and medical device manufacturing.

"We've got a good base of (food processing)," and that could be a springboard to life sciences and pharmaceuticals businesses, which use similar manufacturing processes, Maloney said.

Jim Cummings, vice president of marketing at Mericle Commercial Real Estate Services, said he fields a good number of inquiries for manufacturing space, although logistics and warehousing are the strongest draws to the nearly 2,000 acres the company owns in 15 business parks.

"We get excited about manufacturing companies, because they invariably bring other companies with them," Cummings said. "A lot of times the manufacturing deals lead to smaller spin-offs," as subcontractors want to locate close to their customers.

"It's amazing how many have something to do with health care," he said.

He noted there is a Geisinger administrative office and C3i, which offers support to pharmaceutical salespersons.

How other areas fare

Manufacturing is much more significant in the Reading and Lancaster areas. Even though it's one-third smaller than Scranton/Wilkes-Barre, Reading has more manufacturing jobs.

"Manufacturing is strong in our heritage," said Ellen Horan, president of the Greater Reading Chamber of Commerce.

But there have been challenges. While "manufacturers held pretty steady" in the last recession, in the downturn of 2000-2002, "our manufacturers struggled and a lot of them closed."

"The manufacturers that survived have been slowly rehiring," Horan said. "So it's not really attracting new manufacturing, it's growing our own."

Due to its location and cultural heritage, the Lancaster area has a foothold in particular industries.

"One of Lancaster County's historic strengths has been a diversified manufacturing base," said Lisa Riggs, president of the Economic Development Company of Lancaster County. As in NEPA, food processing, while already strong, is seen as a significant opportunity, potentially attracting pharmaceutical makers.

Wood finishing is another industry, where Lancaster County has depth in a niche category, Riggs said.

That county is seeing growth in warehousing, but Riggs said business leaders are discussing whether they want to encourage that industry.

The job mix in the Lehigh Valley is even more service-oriented than in Scranton/Wilkes-Barre, but economic development leaders are beginning to sense opportunity in manufacturing.

"Our economy has experienced a lot of growth and transitioned into something that's a little more diverse," said Tony Ianelli, president of the Greater Lehigh Valley Chamber.

Once dependent on heavy industry behemoths like Bethlehem Steel, "we're made up of many more smaller businesses now," and they tend to need more services, he said.

Now his organization is starting to push for manufacturing, pairing with the Manufacturer's Resource Center, "because we saw the growth in the market" and were being asked by members to connect them with other manufacturing firms. Meetings targeted specifically to manufacturing attract hundreds of attendees, Ianelli said.

Riggs and Ianelli emphasized that cooperation among stakeholders was a key to success in building their regions' business base.

Riggs singled out higher education as an important factor.

The Lancaster region has a very diverse landscape of higher education institutions, from a technical college for trades to Franklin & Marshall, Pennsylvania College of Art and Design, Millersville University and community colleges.

"We feel that we have the tools in place to push toward the educated work force we need," Riggs said, but it still needs to be honed for the jobs of the future.

Ianelli said a regional outlook has been important in the Lehigh Valley, which has 5,000 members in an area that spreads across Lehigh, Northampton and Carbon counties.

"The regional effort is absolutely necessary, there are huge dividends," he said. Each community has unique resources and amenities, and 31 affiliate organizations assure every part of the region has a voice.

Higher education and regionalism have been hot topics among Scranton/Wilkes-Barre economic planners for years, but have not yet reached fruition, leaders say.

"The quality and availability of labor is a top consideration" with new companies, Mericle's Cummings said. While the region has strengths in its location, low operating costs and productivity, "long term, it's the overall shortage of skills within the regional workforce" that could be a drag on growth, particularly in technical, engineering and advanced manufacturing skills.

Penn's Northeast's Maloney said that while the local workforce could easily transition from food processing to pharmaceuticals production, high-tech manufacturing, such as for medical devices, requires more professional skills.

"Medical device companies want to be around engineering, even if they're just doing manufacturing," Maloney said.

He's glad to see local colleges and universities ramping up their engineering programs, but that will take time, so high-tech may be a deferred dream.

As for cooperation, after years of talk, "I think as a region the partners are on board and I think it's aligned right."

Some businesses are taking their own initiatives to build the workforce they need. At Pulverman Precision Metal Components in Dallas Township, Bill Race, vice president of manufacturing resources, said the company must hire qualified people for engineering and other skilled positions.

But, he added, "We'll take people on that aren't skilled but do have the desire and aptitude to learn."

The company then provides on-the-job training in production-related work.

The company suffered during the Great Recession, but employment has rebounded to 150 from about 100 in 2009.

The business turns out specialized metal products for the truck making, construction and equipment industries.

"We get sheets of steel in one end of the building and send parts out the other end," Race said.