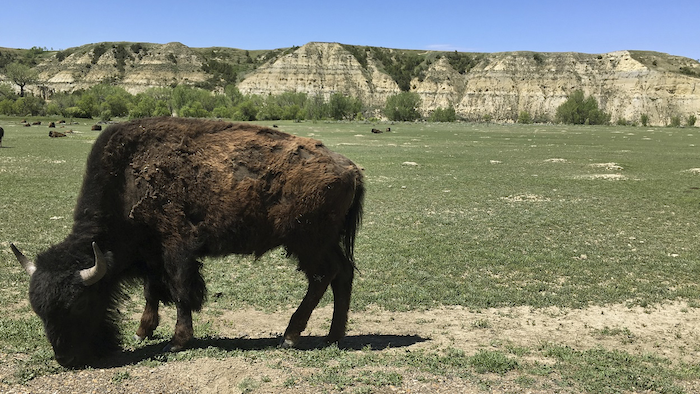 In this May 24, 2017, file photo, a bison grazes in Theodore Roosevelt National Park in western North Dakota. North Dakota's Health Department has issued a permit allowing construction of an oil refinery about 3 miles from the park. Image credit: AP Photo/Blake Nicholson, File

The Davis Refinery still has other hurdles, but the permission to build that followed a 1 ½-year state review is a major victory for the project planned by Meridian Energy Group, based in California and North Dakota.

"The confirming review by the (state) was the most thorough review I've been involved with in my career," Senior Project Manager Dan Hedrington said. Meridian CEO William Prentice said the state review "validates" work the company has done ensuring the plant will be "the cleanest refinery on the planet."

Several groups including the Badlands Conservation Alliance doubt that. Executive Director Jan Swenson called it "a pretty sad day for the state of North Dakota."

The state review included a public comment period that generated more than 10,000 comments. The review essentially concluded that the refinery will be a minor source of pollution and won't negatively impact the park. However, after it's built, it will need to obtain an air quality permit by proving it can meet state and federal air quality standards. Compliance will be continually monitored.

There is no state requirement for an independent review.

"Not only do we do routine inspections, we also require them to put continuous emission monitors on, and we can get that data at any time," state Air Quality Director Terry O'Clair said.

Opponents worry about pollution in the 30,000-acre (12,000-hectare) park named for the former U.S. president who ranched in the region in the 1880s and is revered for his advocacy of land and wildlife conservation. The park is the state's top tourist attraction, drawing more than 700,000 visitors annually.

Opponents also question Meridian's production estimates. The company says the refinery will process about 27,500 barrels of oil daily, with a production capacity of 49,500 barrels per day — just under the 50,000-barrel threshold that triggers a siting review by the state's Public Service Commission. The company denies trying to skirt state permitting law.

Supporters of the refinery point to its potential impact on the economy. It could create 500 construction jobs and permanent jobs for 200 people in the area, while generating millions of dollars in local property taxes each year. Early estimates were that it would cost more than $800 million to build, though the company has made changes in its plans since.

The project still needs a permit from the State Water Commission to use underground water for the refinery. Neighboring landowners are challenging a recommendation from the state engineer to approve the request. A hearing before an administrative law judge is set for October.

The project also needs a permit from the state Health Department to dispose of wastewater underground, a review process that could take up to six months. The company and state have discussed the permit but the company has not yet formally applied, according to the department.