A deadly blast at a fireworks plant in Washington state came as workers were preparing shells for shipping, an Entertainment Fireworks official says. 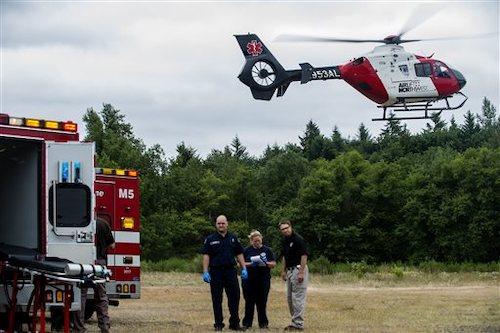 TENINO, Wash. (AP) -- A deadly blast at a fireworks plant in Washington state came as workers were preparing shells for shipping, an Entertainment Fireworks official says.

After the explosion Wednesday morning, a 75-year-old man died of his injuries while awaiting an airlift to a regional trauma center.

The man who died was a long-time company employee, the sheriff's spokesman said. Thurston County Coroner Gary Warnock said late Wednesday he had not yet released the man's name pending notification of relatives.

Representatives from the U.S. Bureau of Alcohol, Tobacco and Firearms and the state Department of Labor and Industries are investigating.

The explosion and fire at the plant south of Olympia destroyed a cloth-walled working area and part of a large box truck, Elwin said.

"Right now this appears to be non-criminal and non-intentional — an unfortunate accident related to this type of business," he said.

More people could have been hurt and more buildings damaged if the company hadn't been following regulations that require fireworks transfers to happen away from other buildings and other explosives, Elwin said.

The company is licensed by the state and federal governments, and is "a very reputable fireworks firm," said Brennan Phillips, an ATF explosives officer in Seattle.

"They've been here a long time, and generally have a good safety record," he said.

There are a number of ways the explosion could have been sparked, including static electricity or some type of radio device or a cell phone in the area, Phillips told The Olympian (http://is.gd/4VZvMM ).

"It's explosives -- it's fireworks -- there are some hazards involved," he said.

There have not been any complaints or incidents to trigger a safety inspection at the company during the past nine years, Labor and Industries spokeswoman Elaine Fischer said.

"This is the first incident in decades of a workplace death related to fireworks," she said.

"We are a small company where everyone works together -- it's like a family," Julian said in his statement. "When something like this happens, it is devastating. We have been in business more than 16 years and nothing like this has ever happened as safety is our number one priority and we pride ourselves on our highly qualified staff."

On its website, Entertainment Fireworks says it's the largest fireworks company based in Washington.

Mark Rorvic, 54, who lives across the street, told The Olympian he awoke to the sound of the explosions.

Rorvic said he used to work for the fireworks company.