The company known for kitchen and bathroom fixtures has opened its factory floor to artists for the past 40 years, allowing them to share ideas and techniques with factory workers so that both can be inspired. 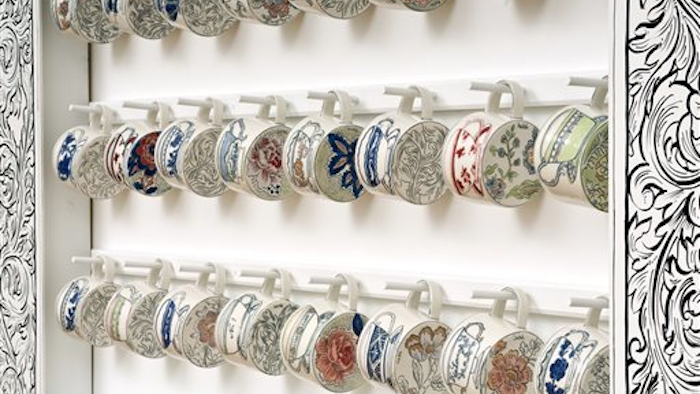 MILWAUKEE (AP) -- The Kohler sink in your bathroom may be more of a work of art than you realize.

The company known for kitchen and bathroom fixtures has opened its factory floor to artists for the past 40 years, allowing them to share ideas and techniques with factory workers so that both can be inspired.

Three artists have created pieces produced by Kohler Co., and many more have gone on to design for other companies.

The program, celebrating its 40th anniversary, is notable for its longevity and impact on the arts world, said Larry Bush, a ceramics professor at the Rhode Island School of Design. Kohler is unique in letting artists work on the factory floor with employees and providing equipment to create work on a massive scale, he said.

Ruth DeYoung Kohler — a print maker, former teacher and granddaughter of Kohler Co. founder John Michael Kohler — created the Arts/Industry program at the John Michael Kohler Arts Center soon after taking over as director in 1972. Artists who visited Kohler during a clay exhibition were hungry for access to the factory's molds and other resources, and eager to learn the techniques used by craftsmen working there, she said. There was little interaction between the worlds of fine art and manufacturing at the time.

Kohler convinced her brother, Kohler Co. Chairman and CEO Herb Kohler Jr., to let two artists work at the factory for a month.

"They created all these fanciful things with the plumbing products," she recalled. "So, for example, they took a urinal, turned it on its back, added some clay wheels and filled it full of clay teeth and called it the Tooth Fairy Wagon. And then they took two toilets and put them back to back ... and they turned it into a rocket ship."

The project so captivated Kohler workers that the artists were invited back for another month in late 1974. Since then, more than 400 artists have completed residencies lasting up to six months. A retrospective of their work is on display through Aug. 31 at the John Michael Kohler Arts Center in Sheboygan, about an hour north of Milwaukee.

Jan Axel, who completed two residencies at Kohler in 1979 and 1981, created a sink carved with undulating lines, and the company later produced it commercially. Axel went on to create a program that brought artists to Kohler to embellish plumbing fixtures for sale. Such collaboration was radical at the time.

"It was sort of 'not done' because people wanted to be considered artists. They didn't want to be designers," said Axel, of South Salem, New York, who went on to do product and landscape design.

Molly Hatch, a ceramics artist from Northampton, Massachusetts, said her 2009 residency gave her a new career designing tableware for Anthropologie, and stationery and fabrics for other companies. Hatch said that learning to use liquid clay and molds at Kohler allowed her to create pieces with a consistency she couldn't achieve by hand.

At the same time, she was struck by the amount of handcrafting done at Kohler, and she now creates products that combine mass production and a personal touch.

"Being exposed to the way things were made on the floor at the factory at Kohler, I realized there's so much more involved, and a person behind the object, and so much more pride taken in every object," Hatch said, adding, "It just changed my understanding of the process completely."

Kohler said the factory workers teaching the artists to use molds and other equipment also have been changed by the experience.