The illustrations, which could include pictures of cancerous lungs and throats, will occupy the lower half of the front and back panels of a cigarette pack. The current warning contains only words, saying that smoking is dangerous. 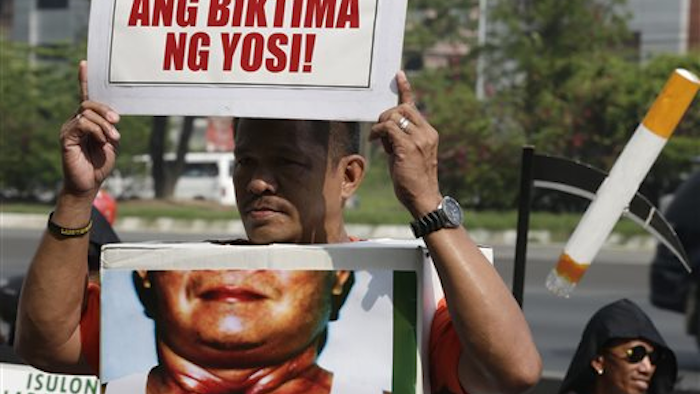 MANILA, Philippines (AP) -- A Philippine legislative committee approved a bill on Tuesday that would compel cigarette manufacturers to print illustrations of smoking hazards on cigarette packs to curb smoking in a country where tens of thousands die yearly from tobacco-related diseases.

The committee composed of both senators and congressmen passed the bill directing the Department of Health to issue 12 templates of pictures and illustrations that warn about the dangers of smoking.

The full Senate and House of Representatives are expected to formally pass the bill before it is signed into law by President Benigno Aquino III, who backed an earlier "sin tax" law that raised taxes on tobacco and alcohol products.

The illustrations, which could include pictures of cancerous lungs and throats, will occupy the lower half of the front and back panels of a cigarette pack. The current warning contains only words, saying that smoking is dangerous.

Philippine health officials said in 2012 that 17.3 million of the country's 96 million people smoke — one of Southeast Asia's highest rates — and 87,000 die per year from tobacco-related diseases.

"This is a big victory for health advocates," said Dr. Anthony Leachon, president of the Philippine College of Physicians.

Leachon said images of damaged body parts, such as before-and-after pictures of a lung ravaged by smoking, will have a greater impact, especially on non-smokers.

The bill also instructs the Department of Education to include the hazards of smoking in the school curriculum.

In recent years, more than 40 countries or jurisdictions have introduced cigarette labels with graphic anti-smoking warnings. The World Health Organization said in a survey done in countries with graphic labels that a majority of smokers noticed the warnings and more than 25 percent said the warnings led them to consider quitting.

The Philippine bill follows the passage in late 2012 of a "sin tax" law, which raised the excise tax on tobacco and alcohol products to discourage their use and raise revenues for health programs.

A recent survey commissioned by the Department of Health indicated that the law helped reduce smoking among the poor and young people, the main targets of the law.

It said that smoking prevalence among the very poor dropped from 38 percent in December 2012 to 25 percent in March this year. Smoking among people aged 18 to 24 also fell from 35 percent to 18 percent during the same period.