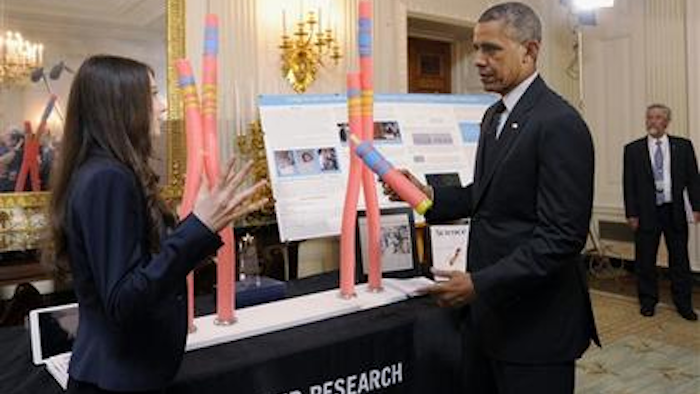 The president pointed out that men outnumber women studying and working in science and that women earn fewer than one in five bachelor's degrees in engineering and computer science.

"Half our team we're not even putting on the field," he said, after touring exhibits at the annual White House Science Fair. "We've got to change those numbers."

Obama announced a new $35 million Education Department competition to train the best math and science teachers. He also announced programs to expand science and technology education for low-income students and to start new mentoring efforts in seven communities across the country.

He noted that he often greets champion athletes at the White House, most recently the Super Bowl champion Seattle Seahawks. But he said accomplished students deserve such honors, too.

"As a society, we have to celebrate outstanding work by young people in science at least as much as we do Super Bowl winners because super-star biologists and engineers and rocket scientists and robot builders, they don't always get the attention that they deserve, but they're what's going to transform our society," he said.

Among the displays are a "concussion cushion" designed by a 19-year-old California student who aspires to be the first female collegiate head football coach. Two Massachusetts girls exhibited a rescue robot. A 12-year-old boy from Ft. Lauderdale, Florida, showed Obama how to create "sandless" flood retention sandbags. And an 18-year-old New York high school senior and cancer survivor described how her illness prompted her to become interested in cancer research.