Bipartisan Senate negotiators said Thursday that they'd struck a $9.7 billion compromise over the issue, agreeing to a five-month extension paid for by boosting some federal revenues. 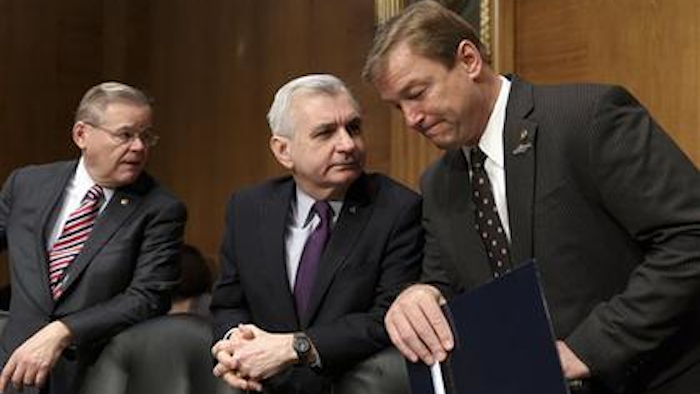 WASHINGTON (AP) — Chalk up one partisan election-year battle that senators seem likely to resolve when they return from recess later this month — the fight over renewing expired benefits for the long-term unemployed.

Bipartisan Senate negotiators said Thursday that they'd struck a $9.7 billion compromise over the issue, agreeing to a five-month extension paid for by boosting some federal revenues. Approval seemed likely by the Democratic-led Senate when it returns in late March from a weeklong recess. That would throw the issue into the Republican-run House, where its fate is uncertain.

The revived benefits would be retroactive to Dec. 28, when the program expired, ultimately halting emergency coverage to more than 2 million people who've been without jobs the longest.

That holiday season cessation of payments had ignited partisan warfare over an issue that fit neatly into the parties' campaign-season competition over which was best creating jobs and helping families still struggling to right themselves after the Great Recession of 2007-2009. Democrats said opposition by most Republicans underscored GOP indifference to financially stressed families, while Republicans said they wanted an extension to be paid for and to improve federal job programs.

Sen. Jack Reed, D-R.I., a leading bargainer, said Thursday's agreement would help families and "provide a little certainty to families, business and the markets that Congress is capable of coming together to do the right thing."

Added another top negotiator, Sen. Dean Heller, R-Nev., "I'm so glad that both Democrats and Republicans have come together on a proposal that will finally give Americans certainty about their unemployment benefits."

Rhode Island had an unemployment rate in December of 9.3 percent and Nevada's was 9 percent — the two worst rates in the nation.

Lawmakers said the proposal was fully paid for, with the bulk of the money raised by extending some customs fees through 2024 and delaying some companies' contributions to their pensions, in effect increasing their taxes now but reducing them later. More federal revenue would be raised by letting some companies make earlier payments to the Pension Benefit Guaranty Corp., which guarantees workers' pensions.

The deal would end jobless payments to people earning more than $1 million a year. The lawmakers cited 2010 data showing that 0.03 percent of taxpayers earned over $1 million and received some form of federal or state unemployment benefits.

The agreement also has a provision aimed at improving programs that help the long-term unemployed find new jobs and strengthening how the government verifies that they are eligible for unemployment benefits and assistance in finding jobs.

The measure will need 60 Senate votes to overcome Republican procedural tactics aimed at killing it. But with Democrats having 55 votes — including two usually supportive independents — supporters seemed to have a strong chance of reaching that threshold because five Republicans co-sponsored the announced deal.

They were Heller and Sens. Susan Collins of Maine, Rob Portman of Ohio, Lisa Murkowski of Alaska and Mark Kirk of Illinois.

Jobless Americans can qualify initially for state-sponsored unemployment benefits, which generally run for 26 weeks. After that, they can receive emergency federal coverage that lasts from 14 weeks to 47 weeks, depending on how high unemployment is in their state.

When the emergency program expired Dec. 28, 1.3 million people immediately lost those benefits. Since then, an average of 72,000 people weekly exhausted state benefits and could not receive emergency coverage, according to the liberal National Employment Law Project, bringing the current total to just over 2 million.

In December, House Speaker John Boehner, R-Ohio, said Republicans would consider extending emergency benefits "as long as it's paid for and as long as there are other efforts that will help get our economy moving once again."

Boehner spokesman Michael Steel had no immediate comment Thursday on the Senate compromise.