The resumption of commercial horse slaughter in the U.S. was blocked Friday as President Barack Obama signed a budget measure that withholds money for required federal inspections of the slaughtering process. 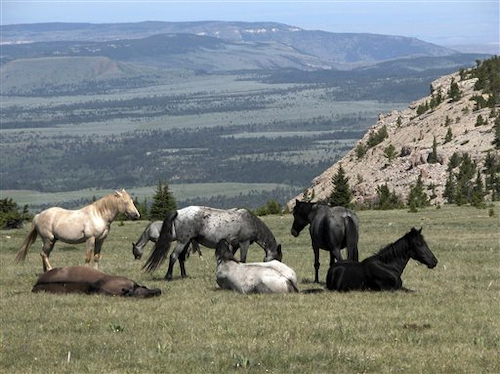 SANTA FE, New Mexico (AP) -- The resumption of commercial horse slaughter in the U.S. was blocked Friday as President Barack Obama signed a budget measure that withholds money for required federal inspections of the slaughtering process.

Although the measure provides temporary funding for the federal government, it stops the Agriculture Department from spending money for inspections necessary for slaughterhouses to ship horse meat interstate and eventually export it to overseas consumers.

"This clear message from Washington echoes the opinions of an overwhelming number of Americans from coast to coast: horse slaughter is abhorrent and unacceptable," said Matt Bershadker, president and CEO of the American Society for the Prevention of Cruelty to Animals.

The president's action came as a New Mexico judge granted a preliminary injunction against a Roswell company from moving forward with its plans to start slaughtering horses.

The ruling by state District Judge Matthew Wilson will keep alive a lawsuit by Attorney General Gary King, who's seeking to permanently block horse slaughter in New Mexico. The lawsuit could serve as a possible insurance plan in case the federal government provides inspection funding in the future.

Blair Dunn, a lawyer for Valley Meat, said the company will continue to wage a legal fight to convert its cattle processing plant to the slaughtering of horses. He contended that the federal move to withhold money for meat inspections could cause U.S. trade violations.

"I don't see them opening now. No matter what, they are not going to violate the law," said Dunn, who also represents a plant in Missouri that wants to produce horse meat.

Valley Meat is trying to disqualify the judge who's handling the case because of comments posted by horse slaughter opponents on a Facebook page for the judge's election campaign. Wilson issued an order Friday saying he would consider setting a hearing on the company's request.