Kimberly Janvier says the sounds from a construction site are all it takes to trigger intense memories of that day. The 36-year-old scaffolder was working at an oil refinery in Regina when a pipe burst and her life changed forever. "There was this big boom, and I remember cringing," Janvier... 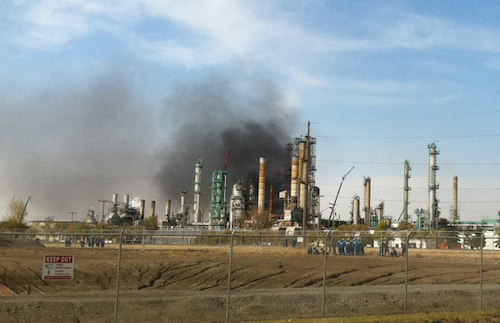 Kimberly Janvier says the sounds from a construction site are all it takes to trigger intense memories of that day.

The 36-year-old scaffolder was working at an oil refinery in Regina when a pipe burst and her life changed forever.

One of the memories she can't escape, she says, is watching her hard hat roll away.

Severe burns on her hands, face, neck and ears confined her to hospital for six days. She needed another three months of outpatient treatment in her home city of Edmonton. She was left with nerve damage in one leg.

Janvier is one of several workers injured that day who are collectively suing Consumers Co-operative Refineries Ltd., as well as associated companies that were involved in the plant's refurbishment. She says the group is frustrated with the drawn-out legal process.

An investigation found that the explosion, which injured 52 people in all, was caused by a ruptured pipe thinned by corrosion.

The group's lawyer filed a statement of claim in April that alleges negligence put workers at risk. The statement says there were known safety concerns before the explosion, including possible gas leaks, lack of alarms and an inadequate emergency medical plan.

None of the allegations has been proven in court and Co-op spokesman Brad DeLorey says he can't comment because it's an ongoing legal matter. A statement of defence has yet to be filed.

Fourteen months after the explosion, Janvier returned to work as a scaffolder, but she says she can no longer work at oil and gas refineries because of the trauma she suffered. Even when she knows nothing is running through the pipes, "little things" trigger memories of the explosion.

"Noises will trigger," she says, crying.

Janvier moved from Edmonton to Kamloops, B.C., in an attempt to escape the memories that haunt her on a daily basis.

"I moved out of Edmonton because there were plants everywhere. I had to get away from it."

Since 2011, there have been four fires at the Regina refinery, including an explosion last Christmas Eve. Last week, an investigation report was released that revealed another ruptured pipe caused that blast.

Irene Rombaut, another plaintiff in the lawsuit from the 2011 blast, says she was rattled when she heard about the Christmas Eve explosion.

"I would like to see changes," she says. "I still have family and friends who work at the Co-op."

Like Janvier, Rombaut, 53, was also working as a scaffolder when the blast happened.

She suffered severe burns on her face, ears, neck, back and arms, as well as on the inside of her mouth and throat. She says her injuries and long recovery traumatized her four children, who are also plaintiffs in the case and allege that they suffered emotional distress.

When Rombaut flips through photos on her phone, she pauses at one taken a month before the explosion.

"I think I'll keep that one forever," she says with a laugh. She likes the image of herself, free from the scars she lives with now.

Rombaut spent 21 days in hospital — time split between the intensive care unit and the burn unit.

She remembers co-workers screaming at her to run when the explosion occurred.

"My lungs were burning," she says. "I remember the pain a lot. I remember praying.

"They said I was screaming. I don't remember screaming."

Tavengwa Runyowa, who is representing the workers, says an adjudication process set to resume in the new year through the Workers' Compensation Board is to determine whether the lawsuit can move forward.

Saskatchewan law is based on a "no-fault" system, whereby workers aren't allowed to sue their employers for workplace injuries.

"But this system was never meant to ... protect employers who show a callous, continuous and shocking disregard to workers safety," Runyowa wrote in an email.

Peter Federko, CEO of the Workers' Compensation Board, says he can't speak about the case specifically.

The no-fault approach aims to ensure workers can get access to benefits without going through the courts.

"The (cases) that I'm aware of, there has not been a lawsuit that has proceeded," he says.

Runyowa says his clients are skeptical.

"If (the Workers' Compensation Board) kills it, that's pretty much it," he said in an interview. "We will engage the process in good faith."

Shawn Farrell, who was a foreman at the time, says he doesn't know how the group survived the blast. He heard a "horrifying" noise from pipes immediately before the explosion.

"I looked at Kimberly and I saw the hair melting on her head. I knew ... it was a flash fire.

Farrell, 51, suffered burns, hearing damage in both ears, fractures in his back and injuries to his leg.

"I spent three months in a basement apartment in a reclining chair. I couldn't even lie down in the bed," he says. "I get swelling all the time in my left leg. I'm losing (function) in the left side of my body."

But many of Farrell's injuries aren't visible.

He says he has frequent anxiety attacks that are triggered by tasks such as pumping gas into his car or even by watching an explosion on TV.

"I still have nightmares," he says, before adding that he wants to ensure protocols are in place to protect workers in the future.