One clip shows a girl swatting flies from a younger child among piles of trash. Another has children blowing up used medical gloves like balloons. The footage is on the computer screen of Wang Jiuliang as he edits his second film about waste harming China's... 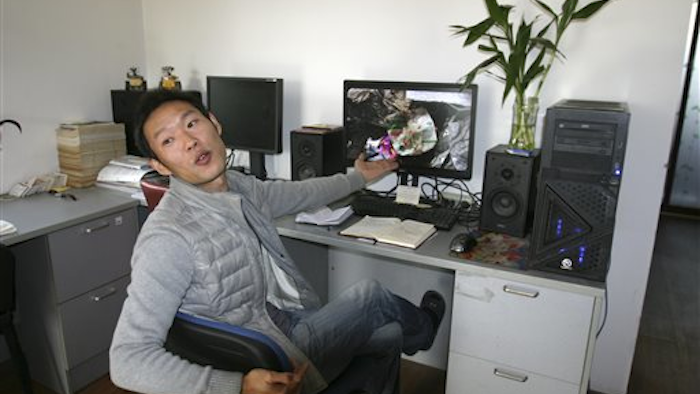 One clip shows a girl swatting flies from a younger child among piles of trash. Another has children blowing up used medical gloves like balloons.

The footage is on the computer screen of Wang Jiuliang as he edits his second film about waste harming China's environment.

He's already in discussions to show it on the main state-run broadcaster and answering calls from state media reporters who want to interview him. This in a country where independent filmmakers critical of the government generally face censorship, harassment or worse.

Environmental filmmakers continue to be hassled at the local level — Wang said he has been chased by dogs, threatened and punched — but their work apparently is being tolerated nationally because it aligns with the Communist Party leadership's new priority of fighting pollution.

Some of these filmmakers are even influencing the authorities.

Meanwhile, their colleagues who are covering evictions and other social issues are increasingly being driven underground.

While the ruling party was long indifferent to the environment as it pursued economic development, combating pollution has shot up its agenda as the public has become more aware of foul air, contaminated produce and polluted water. China last month pledged to cap its carbon emissions by 2030.

In August, police abruptly closed down the Beijing Independent Film Festival that planned to show 70 films covering themes such as the famine resulting from Mao's Great Leap Forward. Distributors say they depend on such festivals to discover new filmmakers, and have seen fewer new films in the past two years, amid a tightening crackdown on freedom of expression under President Xi Jinping.

Independent films in China generally have not gone through the approval and censorship process and therefore cannot be shown in cinemas. Some independent filmmakers can sell their films to TV stations, but otherwise can expect only small audiences of students and film buffs.

Wang's first film, "Beijing Besieged by Waste," was uploaded free to online streaming sites. Clips of it were picked up in news reports throughout China.

"It got a lot of attention by mainstream media and the authorities, so it created an impact that is kind of unheard of," Hui said.

The project started with Wang wondering where Beijing's massive waste ended up.

A photographer at the time, Wang began following a motorcycle collecting waste in his local neighborhood to illegal landfill sites in 2008. He photographed and later filmed the stench-ridden dumps, which were not far from people's homes and fields growing fly-ridden vegetables.

He used Google Earth to plot hundreds of landfill sites over three years, creating a map of dots that formed a huge circle around the capital.

"My aim was to reveal the problem and then solve the problem through making a film," Wang said in an interview at his apartment just outside Beijing.

In 2010, before his film was finished, some of his photos were displayed at an exhibit in southern China, after which his project came to the attention of the official Xinhua news agency.

Xinhua interviewed Wang and said he had ridden his motorbike 7,500 kilometers (4,600 miles) around Beijing, "staying in the cheapest hostels, eating the simplest food, just to shoot a landfill site, just to tell people about what is behind the rows and rows of tall high-rises."

Xinhua asked Wang to contribute to an internal report on the landfills for party officials. Wang said that about three weeks later, a senior Xinhua boss told him Premier Wen Jiabao issued a "lengthy written instruction" to local officials to pay attention to it.

Today, roughly 80 percent of the 530 landfills he filmed have either been shut down or improved, Wang said.

The Beijing municipal government didn't respond to a request for comment.

The International Documentary Film Festival Amsterdam awarded Wang 17,500 euros ($21,700) to help produce his second film, "Plastic China," about how China accepts plastic waste from other countries to recycle and return to the manufacturing chain.

The title "touches on China's vanity," Wang said. "The numerous economic achievements China has made in the last 30 years are worthless and cheap in comparison to the cost to the environment and people's living standards," he said.

He still must be mindful of working inside the boundaries. He is negotiating with CCTV to "weed out sensitive content," such as a scene in which villagers criticize the government, but hopes it will air the film this month.

Another documentary, by Li Zhenzhen, focused on mass killings of birds in a Jiangxi province town. Locals slaughtered the birds as they migrated between Australia and Siberia, to sell to restaurants for a few yuan each.

Li made "Let Migratory Birds Fly" in 2012 while she was a student volunteer at a nonprofit studio founded by director Jian Yi. A year later, she returned to Yingpanxu town and pressed local officials to better enforce conservation laws. By last spring, there were no more reports of bird killings.

It is "a huge improvement and we feel really good," said Li, who now works for an environmental organization in Beijing.

An official from the Forestry Administration of Suichuan County, which covers Yingpanxu, denied that the film had prompted any action. The official, who declined to give his name, said the agency has been sending inspectors to the mountains every autumn for more than 10 years.

Jian said Li's film had a big impact because its team had worked with local authorities, highlighting solutions to a problem that might draw criticism from the central government.

"We try to engage the government instead of turning them into our enemies," he said. "We let them realize it's actually in their interest to work with us or else there would be much greater media coverage of this."