Angry workers set fire to one of Bangladesh's largest garment factories, destroying the nine-story building, because of rumors that a fellow worker had been killed in a clash with police, a company official said Friday. No casualties were reported because the factory was closed at the time. 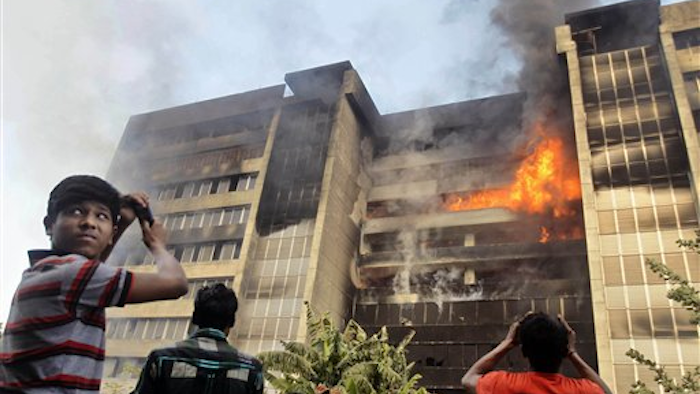 DHAKA, Bangladesh (AP) — Angry workers set fire to one of Bangladesh's largest garment factories, destroying the nine-story building, because of rumors that a fellow worker had been killed in a clash with police, a company official said Friday. No casualties were reported because the factory was closed at the time.

Company official Mushfiqur Rahman said some workers at the factory in Gazipur district near Dhaka were involved in an argument with police on Thursday night. He said the two sides clashed and police used batons and tear gas to disperse the workers.

Someone at a nearby mosque announced by loudspeaker that a worker had died in the police action and the angry workers returned and set fire to the factory, Rahman said.

Police denied that any workers had died.

Workers told local media that the dispute was over unpaid wages, but Rahman denied that.

Fire official Abu Jafar said no casualties were reported in the fire because it occurred after working hours. He said 200 firefighters attempted to bring the fire under control, but some were blocked by angry workers and were delayed in reaching the scene.

He said the workers had a dispute with company management, but could not provide details.

The factory belongs to Standard Group of Companies Ltd., a Bangladeshi company.

There has been a series of deadly accidents in Bangladesh's garment sector, which earns the country more than $20 billion a year in exports, mainly to the United States and Europe.

The industry received global scrutiny for its often harsh and unsafe working conditions after the collapse of a building containing several garment factories killed more than 1,100 people in April and a fire last November killed 112 workers. Global brands, factory owners and the government have pledged to work together to improve conditions.

The United States has stripped Bangladesh of preferential trade rights, saying the country needs to do more to get the privilege back.

Earlier this month, garment workers protested a 77 percent increase in the minimum wage for unskilled workers to 5,300 takas ($66) a month, still one of the lowest in the world. They demanded a wage of 8,114 takas ($100).