The Debate Over Arctic Drilling: What's At Stake?

Seattle's mayor and environmentalists have vowed to block Royal Dutch Shell PLC from parking two Arctic offshore drilling rigs on Seattle's waterfront, an effort to thwart the new frontier in oil exploration and spark a national debate about fossil fuels and climate change. 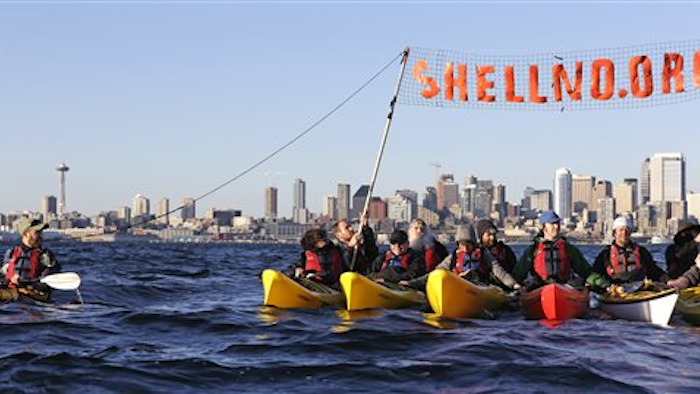 Seattle's mayor and environmentalists have vowed to block Royal Dutch Shell PLC from parking two Arctic offshore drilling rigs on Seattle's waterfront, an effort to thwart the new frontier in oil exploration and spark a national debate about fossil fuels and climate change.

Shell is now approaching $7 billion in Arctic offshore investment, and plans to drill up to four exploratory wells over two years in the Chukchi Sea to determine whether there are commercial quantities of oil and gas.

Shell officials say offshore Alaska offers some of the most prolific, undeveloped hydrocarbon basins in the world. They call it a "potential game-changer" that could increase domestic supply by over 1 million new barrels of oil per day.

Why Is Shell Parking Equipment In Seattle?

Shell stored equipment in Seattle for the 2012 drilling season and wants to again use its deep-water port, loading space and workforce to load drilling rigs and the accompanying fleet with supplies and personnel. It needs to park in Seattle because the location provides not only a port but facilities to load pipe, drilling mud and everything else needed for a complex underwater drilling operation.

Why Are Conservation Groups Opposed?

People concerned with a warming planet object to additional fossil fuel development. They worry that industrial development and a catastrophic spill would ruin a fragile region far from responders.

Arctic drilling protests started well before the 2008 lease sale. Critics say the Minerals Management Service under the Bush administration rushed through the sale without considering the effects on polar bears, walrus and whales, not to mention basic information such as ocean currents and navigation hazards.

Environmental groups contend the oil industry has never demonstrated companies can clean up a major spill in water choked with ice. The Arctic is more than 1,000 miles from the nearest Coast Guard base. The northern Alaska coastline lacks deep-water ports, major airports and the most basic infrastructure for spill responders.

The open water season begins in July and closes a few months later in cold, dark, conditions with some of the most treacherous storms on the planet.

How Do Alaskans Feel About Arctic Offshore Drilling?

State officials welcome drilling. Alaska receives upward of 90 percent of its revenue from the oil industry, and a drop in capacity or a dip in crude oil prices can mean multi-billion dollar state government deficits. Alaska is experiencing both.

Though Shell is drilling in federal waters, Alaska hopes the federal government will share revenue and that Shell and other companies will transport crude through a pipeline system connected to the trans-Alaska pipeline.

Shell says yes. Wells would be drilled in the relatively shallow outer continental shelf at three to five times less pressure than the Deepwater Horizon explosion and spill in April 2010, spokesman Curtis Smith said. In the "unlikely" event of a blowout, Smith said, Shell has drilling mud to plug a well, a containment system that could funnel spilled crude to the surface, a second drill rig stationed nearby to drill a relief well and other tools to minimize damage.

Drilling foes says Shell's 2012 drilling season, which ended with one rig aground off Kodiak and the other fined $12.1 million for breaking maritime law, shows Shell is not prepared to meet Arctic challenges.