Chinese manufacturing suffered its sharpest contraction in a year in April, raising pressure on Beijing to roll out new stimulus to keep growth in the world's No. 2 economy from slipping below the official target, a report said Monday. 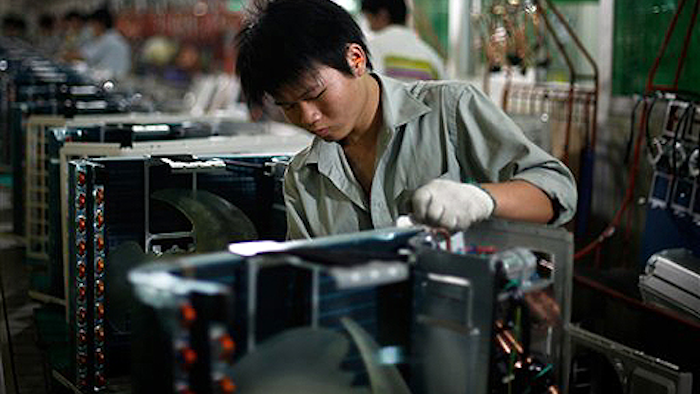 Chinese manufacturing suffered its sharpest contraction in a year in April, raising pressure on Beijing to roll out new stimulus to keep growth in the world's No. 2 economy from slipping below the official target, a report said Monday.

HSBC's manufacturing index based on a survey of factory purchasing managers fell to a 12-month low of 48.9 in April from 49.6 in March. The index is based on a 100-point scale on which numbers below 50 show contraction.

The report said total new orders declined at the fastest rate in a year while production levels stagnated. New export orders, however, improved slightly over the previous month, suggesting that weak domestic demand was the main culprit behind the overall decline.

The latest reading, which is worse than a preliminary reading of 49.2 released in late April, highlights growing urgency for policymakers in Beijing to step in with more stimulus measures to prevent a sharper slowdown as economic growth cools. Recent figures showed that the economy expanded at its slowest pace in six years in the first three months of the year.

"The PMI data indicate that more stimulus measures may be required to ensure the economy doesn't slow from the 7 percent annual growth rate seen in the first quarter," said Annabel Fiddes, economist at Markit, which carried out the survey.

Beijing has taken action several times this year to boost the economy even as leaders have reaffirmed their commitment to a "new normal" of slower growth. In the most recent move, the central bank last month slashed the reserve requirement ratio for banks by a full percentage point to make more money available for lending.

HSBC's index comes after an official survey by the China Federation of Logistics and Purchasing found that manufacturing activity barely eked out growth for a second month in April.