The Senate's top Republican is telling states to ignore a central part of President Barack Obama's plans to curb the pollution blamed for global warming. In an op-ed published Tuesday in the Lexington Herald-Leader, Majority Leader Mitch McConnell of Kentucky says states should reject... 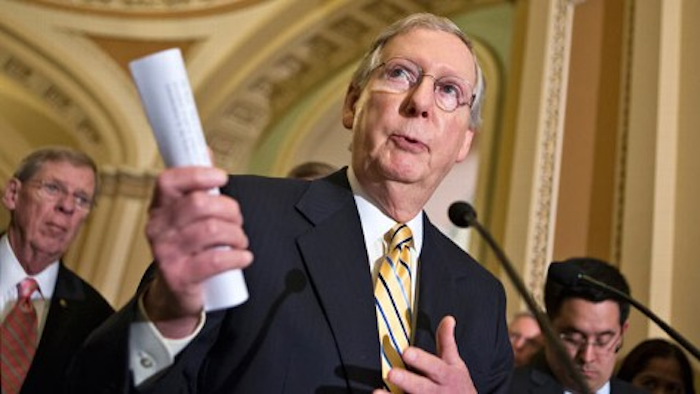 The Senate's top Republican is telling states to ignore a central part of President Barack Obama's plans to curb the pollution blamed for global warming.

In an op-ed published Tuesday in the Lexington Herald-Leader, Majority Leader Mitch McConnell of Kentucky says states should reject Obama's proposed requirements for power plants to reduce carbon dioxide, the chief greenhouse gas. The rule, expected to be final this summer, would require states to submit plans as soon as 2016, or risk being forced to comply with a federal substitute.

"Refusing to go along at this time with such an extreme proposed regulation would give the courts time to figure out if it is even legal, and it would give Congress more time to fight back. We're devising strategies now to do just that," McConnell writes.

Numerous states have already filed lawsuits aimed at blocking or overturning the rules, which would control carbon dioxide from power plants, one of the largest sources, for the first time. And McConnell has long vowed to undo the regulations because of their toll on the coal industry. But Congress is unable to directly overturn them until they are final.

In a hearing on the Environmental Protection Agency's budget on Wednesday, EPA administrator Gina McCarthy assured lawmakers that the proposal, known as the Clean Power Plan, was flexible and that any federal plan could serve as an example for states to draft their own.

However, Republican lawmakers criticized EPA's request for $3.5 million in its budget to hire 20 more lawyers to help defend the proposal from lawsuits and to help states figure out to comply with it. In explaining its budget to Congress, EPA said it expected each EPA action to be challenged in court, requiring "skilled and experienced attorneys specialized in the Clean Air Act to devote significant resources to defense of these actions."

"These attorneys would defend a climate change rule which, according to EPA's own consistent testimony, will not affect climate change," said Sen. James Inhofe, R-Oklahoma, and the chairman of the Senate environment committee.