The oil train that exploded in West Virginia met the industry's voluntary 2011 safety standards, but a growing number of accidents has the Obama administration considering tougher rules for tank cars. A look at what's rolling on U.S. rails... 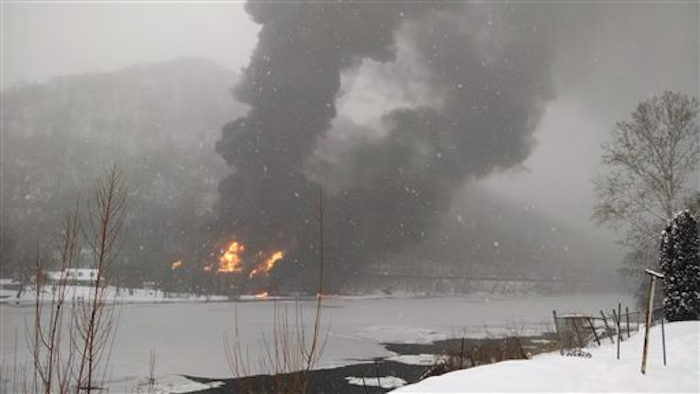 The oil train that exploded in West Virginia met the industry's voluntary 2011 safety standards, but a growing number of accidents has the Obama administration considering tougher rules for tank cars. A look at what's rolling on U.S. rails:

"Legacy" tank cars have a shell that is seven-sixteenths of an inch thick, and no shields to protect their front and back from ruptures. They also lack protective fittings on top where oil is loaded, although some older cars do have an outer jacket, seven-sixteenths of an inch thick, for extra protection. The government wants to phase out these "legacy DOT-111 cars." The Railway Supply Institute said 28,300 of the cars were carrying crude oil and 29,300 were carrying ethanol last year.

To meet the industry's 2011 standard, some "1232 cars" were retrofitted with a thicker, half-inch thick shell; "half-height" shields to protect each end from crumpling; and special top fittings to reduce the risk of ruptures. However, they don't have an outer jacket. Newer 1232 cars have the same thinner shell as the legacy cars, but they have an outer jacket, a full-height shield and special top fittings protection.

Draft regulations sent to the White House budget office for review are not public, but possible requirements considered by the Department of Transportation include a steel shell nine-sixteenths of an inch thick, an outer jacket and a thermal layer in between them to prevent overheating; extra protection for top and bottom outlets; full shields in front and back; systems to prevent cars from rolling over; and electronically controlled brakes that could stop all cars in a formation at the same time rather than sequentially. Oil and rail industries said the brakes alone could cost up to $21 billion for minimal benefits.