Obama said the so-called BRAIN Initiative could create jobs and eventually lead to answers to ailments including Parkinson's and autism and help reverse the effect of a stroke. The president told scientists gathered in the White House's East Room that the research has the potential to improve the lives of billions of people worldwide. 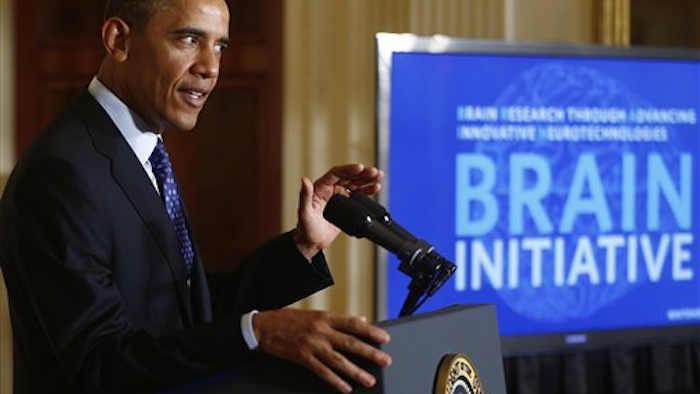 WASHINGTON (AP) -- President Barack Obama on Tuesday asked Congress to spend $100 million next year on a new project to map the human brain in hopes of eventually finding cures for disorders like Alzheimer's, epilepsy and traumatic injuries.

Obama said the so-called BRAIN Initiative could create jobs and eventually lead to answers to ailments including Parkinson's and autism and help reverse the effect of a stroke. The president told scientists gathered in the White House's East Room that the research has the potential to improve the lives of billions of people worldwide.

"As humans we can identify galaxies light-years away," Obama said. "We can study particles smaller than an atom, but we still haven't unlocked the mystery of the three pounds of matter that sits between our ears."

BRAIN stands for Brain Research through Advancing Innovative Neurotechnologies. The idea, which Obama first proposed in his State of the Union address, would require the development of new technology that can record the electrical activity of individual cells and complex neural circuits in the brain "at the speed of thought," the White House said.

Obama wants the initial $100 million investment to support research at the National Institutes of Health, the Defense Advanced Research Projects Agency and the National Science Foundation. He also wants private companies, universities and philanthropists to partner with the federal agencies in support of the research. And he wants a study of the ethical, legal and societal implications of the research.

The goals of the work are unclear at this point. A working group at NIH, co-chaired by Cornelia "Cori" Bargmann of The Rockefeller University and William Newsome of Stanford University, would work on defining the goals and develop a multi-year plan to achieve them that included cost estimates.