India's patent appeals office has rejected Bayer AG's plea to stop the production of a cheaper generic version of a patented cancer drug in a ruling that health groups say is an important precedent for getting inexpensive lifesaving medicines to the poor. 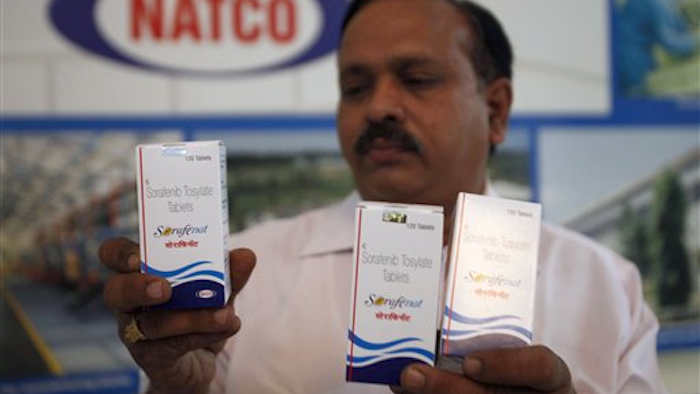 NEW DELHI (AP) -- India's patent appeals office has rejected Bayer AG's plea to stop the production of a cheaper generic version of a patented cancer drug in a ruling that health groups say is an important precedent for getting inexpensive lifesaving medicines to the poor.

Last year, India's patent office allowed local drug manufacturer Natco Pharma Ltd. to produce a generic version of Bayer's kidney and liver cancer drug Nexavar on the grounds it would make the drug available to the public at a reasonably affordable price. It was the first use of compulsory licensing under Indian patent laws passed in 2005.

The Intellectual Property Appellate Board rejected the German drug maker's appeal of the 2012 ruling on Monday. It also ruled that under the license Natco must pay 7 percent in royalties on net sales to Bayer.

Western pharmaceutical companies have been pushing for stronger patent protections in India to regulate the country's $26 billion generics industry, which they say frequently flouts intellectual property rights. However, health activists and aid groups counter that Indian generics are a lifesaver for patients in poor countries who cannot afford Western prices to treat diseases such as cancer, malaria and HIV.

Bayer said Tuesday it "strongly" disagreed with the appeal panel's decision and would pursue the case in the high court in India's commercial capital Mumbai.

"Bayer is committed to protecting its patents for Nexavar and will rigorously continue to defend our intellectual property rights within the Indian legal system," the company said in a statement.

It said one of the main barriers to access to medicines in developing countries such as India is the "lack of adequate healthcare services and infrastructure ensuring that drugs will effectively bring treatment to those who most need it."

Health groups welcomed the panel's ruling saying it would check the abuse of patents and open up access to affordable versions of patented medicines.

"The decision means that the way has been paved for compulsory licenses to be issued on other drugs, now patented in India and priced out of affordable reach, to be produced by generic companies and sold at a fraction of the price," said Leena Menghaney of medical humanitarian aid organization Medecins Sans Frontieres.

The decision might encourage Indian drug makers to explore the compulsory license route to manufacturing drugs that are critical in the treatment of HIV patients.

"We have started to switch people we treat for HIV who develop drug resistance on to newer medicines. But these are expensive, which means not everyone who needs the medicine can afford it," said Menghaney.

She said a World Health Organization-recommended drug such as Raltegravir costs nearly $1,800 per person per year, an unaffordable sum for most HIV patients in India.

"We are waiting to see if drug manufacturers will take up the challenge," Menghaney said.

Under World Trade Organization rules, governments have the right to issue compulsory licenses to overcome barriers to access to cheaper versions of a patented drug without the consent of the company that invented the drug.

"The limited period of marketing exclusivity made possible by patents ensures that the costs associated with the research and development of innovative medicines can be recovered," the company said.

Meanwhile, Swiss drug maker Novartis AG is awaiting a decision by India's Supreme Court on the rejection of patents for its cancer drug Gleevec. That case revolves around a different legal provision allowing India to block "evergreening" — extensions of patents based on minor changes to existing treatments.

The Supreme Court's ruling on the case is expected soon.