How Lower Oil Prices Could Fuel More Hiring In The U.S.

In June, when oil cost $107 a barrel, U.S. employers added a healthy number of jobs — 267,000. Now, with oil below $50,  hopes are rising that hiring in the United States is poised to intensify. Goldman Sachs forecasts that if oil stays near its current price, the economy will add 300,000 more jobs this year than if the price had remained at its June level. 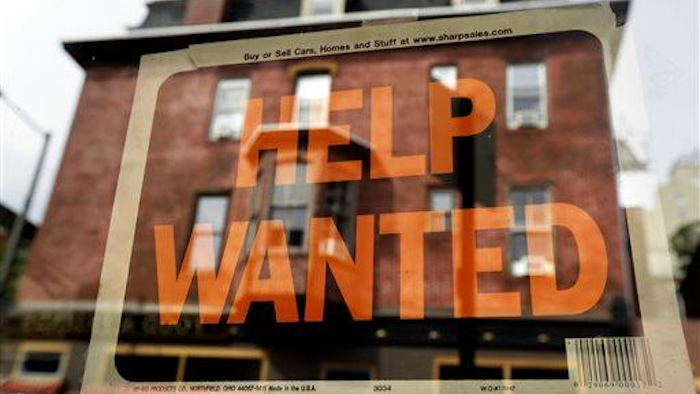 Goldman Sachs forecasts that if oil stays near its current price, the economy will add 300,000 more jobs this year than if the price had remained at its June level. Stronger job growth is foreseen at retailers, auto dealers, shipping firms, restaurants and hotels — all of which will likely show gains in Friday's jobs report for December.

From gas-station prices to utility bills, consumers and businesses are now enjoying savings on basic energy costs. It means more people can splurge on purchases from clothing and appliances to vacations and dinners out. That stronger demand will likely require some businesses to step up hiring, which would circulate more money through the economy and perhaps fuel further job growth.

Just as critically, cheaper gas is suppressing overall U.S. inflation. Lower prices keep down yields on U.S. Treasurys. Lower yields, in turn, serve the housing market by reducing mortgage rates and potentially producing more construction jobs. This week, for example, the average rate on a 30-year fixed mortgage sank to 3.73 percent, its lowest point since May 2013.

"These lower oil costs are a tax cut for everybody — except the energy producers," said Joseph LaVorgna, chief U.S. economist at Deutsche Bank. "It gives us an acceleration in employment."

Not everyone will benefit. U.S. oil and gas drillers risk layoffs if energy prices don't recover. Industry suppliers such as U.S. Steel blamed the falling prices in announcing plans this week to lay off 756 workers who make tubing for the oil sector.

At the same time, those losses, painful for cities such as Houston or Oklahoma City, represent a modest portion of the U.S. job market. The energy sector employs about 1.4 percent of all U.S. employees, according to Deutsche Bank calculations.

So what job sectors stand to benefit?

Sales of new cars are forecast to exceed 17 million this year, a level not reached since 2005, according to auto analysts. The Energy Department says lower gasoline prices will save U.S. households $550 this year — roughly equivalent to four months of lease payments on a 2014 Honda Civic.

The additional sales will help boost the number of manufacturing jobs, which total 12.2 million but remain 1.5 million shy of its pre-recession peak at the end of 2007, according to the government. It would also add to the ranks of the 1.2 million people who work at auto dealers.

"If you're a new-car buyer and your monthly fuel costs are $50 to $75 less than a year ago," he said, "you've got more flexibility in terms of the monthly investment you can make in an automobile."

Frye plans to hire 15 salespeople for the company's six dealerships by March, up from about 12 last year.

Many trucking firms are plowing the savings from lower fuel costs back into their businesses. That helps the 4.7 million workers in the transportation and warehousing industries.

Average pay in the transportation sector have risen 2.5 percent over the past 12 months to $20.61 an hour. But some trucking companies such as Crete Carrier in Lincoln, Nebraska are now advertising annual pay increases of 13 percent to recruit drivers.

Costello said many shipping companies are also replacing their aging trucks, which get as little as 5 miles a gallon, with new vehicles that cost $125,000 a piece — an investment that will likely lead to further hiring by manufacturers over time.

Falling gas prices have been a boon for restaurants. Restaurant sales rose 4.4 percent from June, when gas prices peaked, to November, according to government data. This suggests that hiring is poised to pick up because jobs at restaurants have risen just 1.3 percent over the same period.

Brian Miller of the recruiting firm Patrice and Associates says inquiries from restaurants seeking new managers have jumped. He attributes the increase to lower gas prices, which have boosted sales and "increased the sense of urgency" among many chains.

"Their demand is up, their foot traffic is up, they want to expand," Miller said. "We have companies calling us, saying, 'We need help now.'"

This week, the fast food chain Sonic — with more than 3,500 drive-ins — reported that sales have been boosted by cheaper gasoline.

"There's no doubt in the last six months the price of fuel has been a big contributor," said Cliff Hudson, Sonic's CEO.

At 3.73 percent, this week's average 30-year mortgage rate is down drastically from its 4.51 percent level a year ago. That gap translates into nearly $75 less a month in payments on a roughly average $165,000 mortgage — a savings of almost $900 a year.

Mortgage rates have sunk as yields on 10-year Treasurys have dropped in sync with ultra-low inflation, a response to the oil price decline. Lower mortgage rates make homes more affordable and should help spur gains for the 2.3 million residential construction industry.

"Falling oil prices will probably help local economies and home prices in markets that lack oil-related industries" around the Midwest and Northeast, Jed Kolko, chief economist at the real estate firm Trulia, said in an analysis.

The National Association of Realtors forecast this week that sales of existing homes would total 5.3 million this year, a 7.3 percent increase from 2014.

Housing failed to contribute much to overall economic growth last year, but Michelle Meyer, a senior economist at Bank of America, said she is "cautiously more optimistic" for 2015 because of the lower mortgage rates and likelihood of higher incomes.

This industry is the primary loser from falling fuel costs. Oil and gas drilling has been a source of job growth for five years, though it still constitutes a small percentage of the total. Bob Baur, chief global economist for Principal Global Investors, calculates that drilling has accounted for an average of 3,600 added jobs a month since 2010, out of a total average of 191,000 added each month.

Payroll processor ADP said this week that the mining industry, which includes oil and gas drilling, shed about 2,000 jobs last month after gaining an average of 3,000 a month in 2014.

In the past, Baur notes, falling oil prices have helped fuel healthy expansions for the overall U.S. job market and economy. Plummeting oil costs in 1986 and 1998 led to robust consumer spending.

Some companies that spend a lot on oil and gas will likely enjoy a boost in profits. That could "translate into faster wage growth than we've seen," Baur said.