Every three months, the Manufacturers Alliance for Productivity and Innovation (MAPI) provides a detailed look at the health of the domestic manufacturing sector and reviews the performance of a selected group of its most important subsectors. This report covers the actual data available through July 2013 and provides our forecasts. 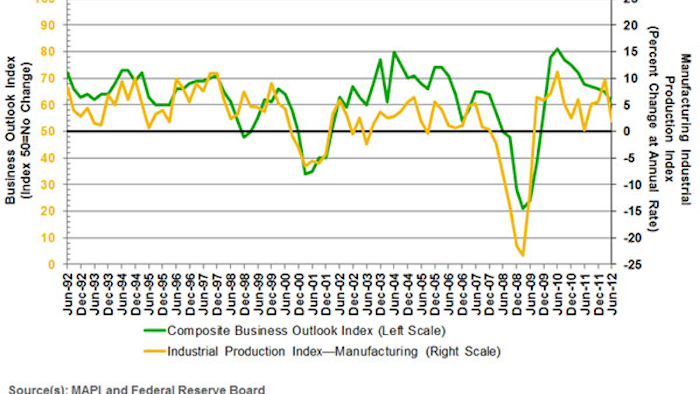 Every three months, the Manufacturers Alliance for Productivity and Innovation (MAPI) provides a detailed look at the health of the domestic manufacturing sector and reviews the performance of a selected group of its most important subsectors. This report covers the actual data available through July 2013 and provides our forecasts, which were completed in late August 2013.

Reports from the Institute for Supply Management’s Purchasing Managers Index in July and August suggest that production has already staged a strong rebound. Acceleration in manufacturing production during the second half of this year is expected, but nothing in the outlook suggests more than a return to moderate growth. The outlook for 2014 and 2015 calls for close to a percentage point improvement in the growth rate each year.

Consumer spending growth has remained remarkably stable because of surprisingly robust employment growth in a sluggish economy. Thankfully, the payroll tax increase is in the rearview mirror, and spending will accelerate in 2014. Households have low debt burdens and their wealth position is rising. Businesses are well positioned for making new investments in structures and equipment. Firms have low debt, are profitable, and have relatively high utilization rates. What is needed is more confidence about the future, with the Eurozone coming out of recession, export activity should pick up and provide a boost to business sentiment.