The company wants to start manufacturing 150,000 electric cars a year from mid-2021. 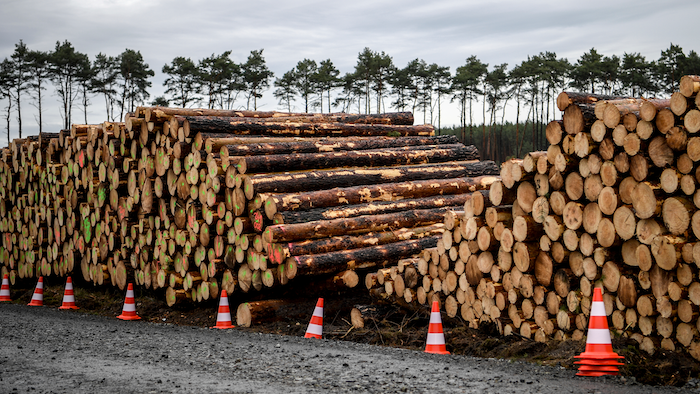 Cleared trees lie stacked on the entrance to the site for the planned Tesla factory near Gruenheide, Germany, Sunday, Feb. 16, 2020.
Associated Press

BERLIN (AP) — A German court has ruled that the clearing of trees from the site of Tesla Inc.'s first electric car factory in Europe can go ahead, days after it issued an injunction temporarily halting the preparatory work.

The top administrative court in the Berlin-Brandenburg region ruled late Thursday that authorities had been within their rights to clear the way for work to start.

The court had issued an injunction last weekend to give it time to consider the case after an environmental group challenged a lower court's ruling that Tesla could go ahead with felling the trees. Final planning approval for the factory has yet to be granted.

The company wants to start manufacturing 150,000 electric cars a year from mid-2021, with plans to increase that number to half a million annually.

Palo Alto, California-based Tesla announced in November that it had decided to build its first European factory in the Berlin area. The planned site is at Gruenheide, just east of the capital in Brandenburg state.

Germany's main business lobby group, the Federation of German Industries, on Friday welcomed the latest court decision. Holger Loesch, a senior official with the group, described it as “an important signal for Germany as a site for investment.”

He called for a wider discussion about planning and approval procedures in Germany, “which over the years have developed into a serious impediment to investment.”

Economy Minister Peter Altmaier said the latest court ruling “is a good signal for environmental protection, jobs and future technologies." He said he also hopes for an intensified discussion of how to speed up planning procedures.

“It has become clear to us all that we only have a chance with such important projects in the long term if we reach decisions in an appropriate time,” he said.