The Navy has invented a new liquid-filled trash can liner with ballistic textiles that can turn any trash can into a bomb disposal bin.

The technology retrofits any trash can to be able to absorb blasts from small explosive devices, like pipe bombs or the pressure-cooker bombs that killed three and injured hundreds during the Boston Marathon in 2013.

Blast-resistant trash cans are already on the market. They lessen shrapnel impact and direct the blast upwards, but The problem is that they weigh up to 2,000 pounds and cost thousands of dollars. They're not practical.

The new bag system is lighter and more portable. During the next big event, officials can swap out bags instead of shipping in trash cans that literally weigh a ton.

The device has two sections: an inner plastic lining surrounded by a liquid mixture of water, antifreeze, and cornstarch, and enclosed by a second, ballistic liner made out of kevlar, graphene, or even rubber. A rigid container extends from the bottom to an open-top that aligns with the top of the trash can.

Last week, the patent was issued to Navy inventors, and this week the technology became available to license and commercialize via Techlink, which works to bring the DoDs inventions to market.

For more information on commercializing the technology, contact Dr. Brian Metzger at brian.metzger@montana.edu.

We have reinvented the wheel pretty much since their inception. In the last few years, we had Goodyear's morphing tire, the Superelastic Tire from NASA, Michelin's Uptis Airless Tires, and BigRep's 3D-Printed airless tires. So, hey, why not one more.

Researchers at the University of Illinois are working on a puncture-proof design that rides like a conventional tire.

The team focused specifically on the shear layer. In a non-pneumatic tire, the shear layer is just beneath the tread and on top of the deformable spikes.

The team used a design optimization computer algorithm to come up with a family of complex, novel designs that should give a flat-proof tire a smoother ride.

Given the complexity of the design configurations, it's understandable to see how 3D printing technology would be the leading candidate to make them a reality.

Next, to see if any of these favorable design configurations are legit, the team is looking to collaborate with an industry partner.

According to Kubota, the X tractor is the future of farming, embracing AI and an all-electric design.

Autonomy is essential if smart farming is going to come to fruition. With ongoing labor shortages and massive farming operations that continue to grow, agriculture is going to have to get smarter.

According to the company, via New Atlas, the concept has a futuristic design. The X tractor's AI could monitor weather data and growth rates to make informed decisions autonomously. It will also be able to communicate with other vehicles in the fleet and equipment on the farm.

The design is fully electric, running on batteries and solar power. The four tracked wheels, or "crawlers" are designed to remain stable in wet and uneven terrain. The shape-shifting crawlers each sport integrated motors to make the tractor more agile, yet steady.

The company is familiar with bold predictions, just look at the Dream Tractor concept from 1970. 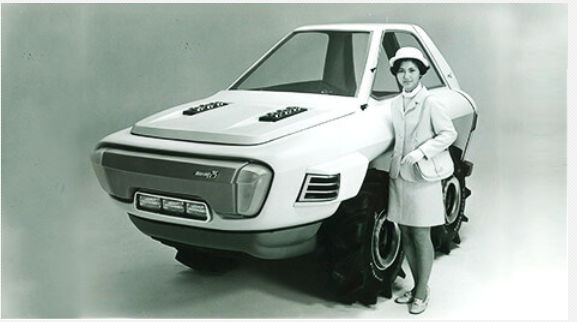