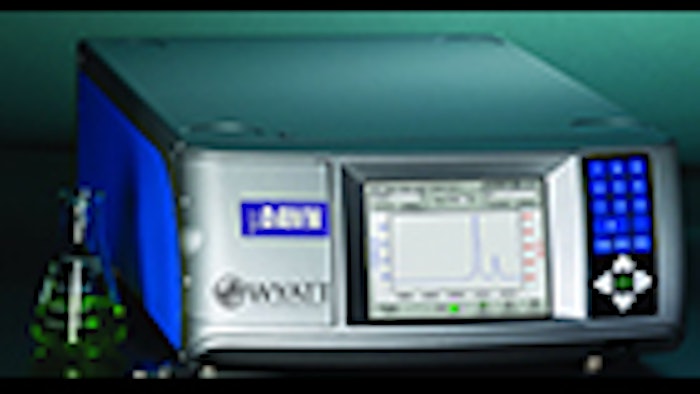 Wyatt Technology Corporation will be launching the µDAWN at Pittcon 2014, this week.The µDAWN is a multi-angle light scattering (MALS) detector that can be coupled to any UHPLC system in order to determine absolute molecular weights and sizes of polymers, peptides, and proteins or other biopolymers directly,

without resorting to column calibration or reference standards. In order to accommodate the narrow peaks produced by UHPLC separation, the conventional light scattering flow cell volume is reduced from 63 µL to fewer than 10µL. More importantly, the band broadening between the µDAWN MALS and Optilab UT-rEX detectors was brought to under 7 µL, while the band broadening between the UHPLC’s UV detector and the µDAWN detector is a mere 2 µL. As a consequence of the reduced cell volume and interdetector band broadening, a µDAWN/UT-rEX system can accurately analyze the molar mass and size of UHPLC peaks without loss of resolution.