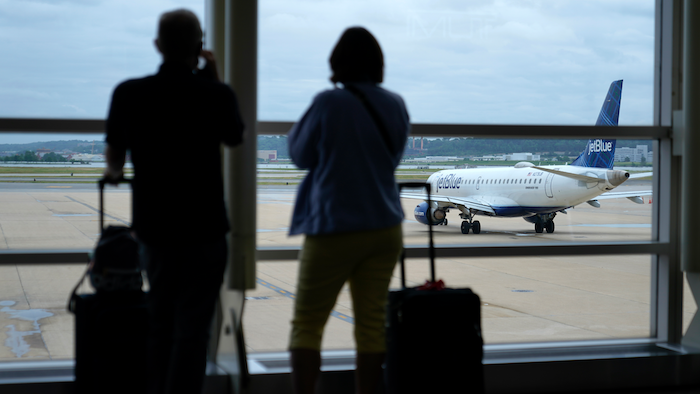 Air travel in the United States hit another pandemic-era record over the weekend as vacationers jammed airports, but shares of airlines, cruise lines, hotels and almost anything else related to travel tumbled Monday on growing concerns about highly contagious variants of coronavirus.

The Transportation Security Administration said it screened more than 2.2 million people at airport checkpoints on Sunday, the highest number since early March 2020, when the pandemic was beginning to crush travel in the U.S. That topped a record set just two days earlier and was the fourth peak recorded in July.

However, Sunday's mark was still 18% lower than on the comparable Sunday in 2019, according to TSA.

Investors weren't celebrating the latest evidence of a recovery in travel since vaccines against COVID-19 became widely available. Stocks were down broadly out of concern over rising infections in many countries, and airline and cruise line stocks were hit especially hard.

Shares of American Airlines and United Airlines tumbled more than 6%, Delta Air Lines fell about 5%, and Southwest was off more than 4% in morning trading.

Shares of cruise lines fell to levels last seen before vaccines were available in the U.S. Carnival tumbled more than 5%, as did Norwegian Cruise Line,

The hotel sector was hammered as well and shares of Airbnb fell, too.

Airlines are frustrated that restrictions on international travel haven’t been relaxed more quickly, and the rise in coronavirus infections — the U.S. daily rate of new reported cases has more than doubled over the past two weeks — could further delay moves to make travel easier.

How Vaccine Passports for Global Travel Will Work