Twenty-nine people were taken to local hospitals following the incident. 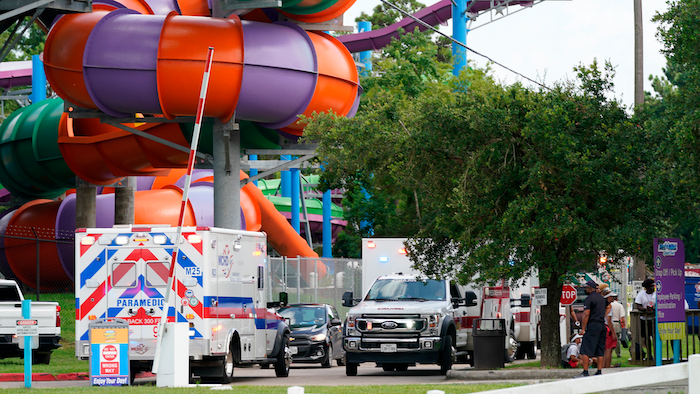 Emergency personnel vehicles are parked near the scene where people are being treated after chemical leak at Six Flags Hurricane Harbor Splashtown.
Melissa Phillip/Houston Chronicle via AP

Twenty-nine people were taken to local hospitals following the incident at Six Flags Hurricane Harbor Splashtown in Spring, the Harris County Fire Marshal’s Office tweeted. Thirty-nine others declined to be taken to a hospital after undergoing decontamination procedures.

KPRC-TV reports that some of those who became sick were children, including a 3-year-old who was hospitalized in stable condition.

“The safety of our guests and team member is always our highest priority and the park was immediately cleared as we try to determine a cause,” Hurricane Harbor Splashtown spokesperson Rosie Shepard said in a statement, according to news outlets. "Out of an abundance of caution, the park has been closed for the day.”

Authorities are investigating the cause of the incident, which they said was contained to one attraction at the park.