A new generation of robotic tools is beginning to be realized. 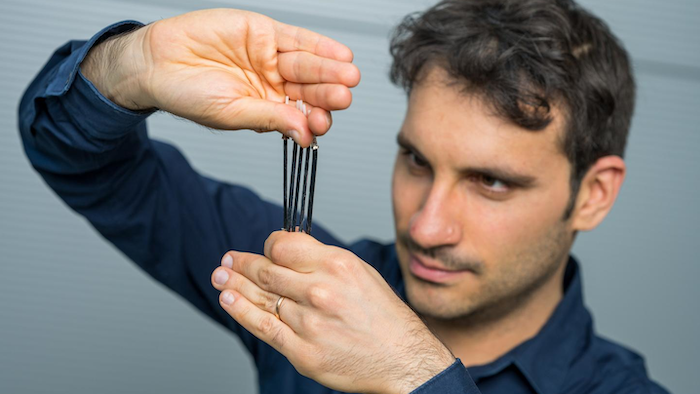 Imagine flexible surgical instruments that can twist and turn in all directions like miniature octopus arms, or how about large and powerful robot tentacles that can work closely and safely with human workers on production lines.

A new generation of robotic tools is beginning to be realized thanks to a combination of strong "muscles" and sensitive "nerves" created from smart polymeric materials. A research team led by the smart materials experts Professor Stefan Seelecke and Junior Professor Gianluca Rizzello at Saarland University is exploring fundamental aspects of this exciting field of soft robotics.

In the factory of the future, man and machine will work side-by-side -- in harmony, as a team, joining forces whenever necessary -- just as if the robot co-worker was made from flesh and blood. While collaborative robots (cobots) are already being deployed in industrial production lines, real hand-in-hand teamwork involving robots and their human counterparts is still some way off. The problem lies in the physical proximity of human co-workers, whose actions -- unlike those of a robot -- do not follow predictable algorithms. A human worker can become tired or distracted and may act suddenly or even illogically as a result. This has clear implications for safety and explains why the robot arms currently used on production lines are often housed in cages. For anyone who gets too close, things can get dangerous. Typically, industrial robots are large, heavy machines. But they are also powerful, fast and agile and are used for a wide range of operations, like welding, assembling, painting, stacking and lifting. However, the motions that they execute are dictated wholly by the programs that control them. And if someone gets in their way or too close, the consequences can be serious.

The team led by Professor Stefan Seelecke and Junior Professor Gianluca Rizzello of Saarland University and the Center for Mechatronics and Automation Technology (ZeMA) in Saarbrücken are working on new, smart types of robot arms. 'Our technology is based on smart polymer systems and enables us to create novel soft robotic tools that are lighter, more maneuverable and more flexible than the rigid components in use today,' explains Stefan Seelecke. An accidental shove from one of these robotic arms of the future would be more like being pushed by a human co-worker (and less likely to land you in hospital).

The material used for these new soft robot arms is a special kind of polymer known as a 'dielectric elastomer'. The Saarbrücken researchers are using this composite material to create artificial muscles and nerves. The special properties of dielectric elastomers make it possible to develop systems inspired by the ingenious designs found in nature. These elastomers can be compressed, but can then be stretched to regain their original shape.

"We print electrodes onto both sides of the elastomer material. When we apply a voltage, the two electrodes attract each other, compressing the polymer and causing it to expand out sideways," says Dr. Gianluca Rizzello, Junior Professor for Adaptive Polymer-Based Systems. The Italian research scientist has been working in Seelecke's team since 2016. The elastomer can thus be made to contract and relax, just like muscle tissue.

"We exploit this property when designing our actuators," explains Rizzello. By precisely varying the electric field, the engineers can make the elastomer execute high-frequency vibrations or continuously variable flexing motions or even remain still in a particular desired intermediate position.

The researchers then combine a large number of these small "muscles" to create a flexible robot arm. When combined in this way to form a robot tentacle, the interplay between the muscles produces motions that mimic those of an octopus arm that can twist and turn in all directions. Unlike the heavy, rigid robotic limbs currently in use, which, like humans, can only execute motions in certain directions, these new robot tentacles are free to move in almost any direction. Gianluca Rizzello together with his doctoral student Johannes Prechtl recently won the Best Paper Award at the RoboSoft 2021 conference for their work on developing a prototype dielectric-elastomer-based tentacle - just one of the numerous accolades earned by Professor Seelecke's research team. The team hopes to have the tentacle prototype fully developed in about a year's time.

When it comes to imparting intelligence into polymeric materials, Gianluca Rizzello is something of an expert. He provides the control unit (i.e. the robot's 'brain') with the input needed to move the arm in an intelligent manner -- a highly complex and ambitious task.

"These systems are significantly more complex than the robot arms in use today. Using artificial intelligence to control polymer-based components is substantially more challenging than controlling conventional mechatronic systems," says Rizzello. As the elastomer muscles also have sensor properties, they can act as the system's nerves, which means that the robot arm does not need to be equipped with additional sensors.

This quantitative data can then be used to precisely model and program the motion of the elastomer arm. The focus of Rizzello's research work is on developing intelligent algorithms that can train these novel robot tentacles to move and respond in the required manner.

"We are attempting to uncover which physical properties are responsible for the behavior of these polymers. The more we know, the more precisely we can design the algorithms to control the elastomer muscles," says Dr. Rizzello.

The technology being developed in Saarland will be scalable. It can be used to create miniature tentacles for medical instruments or to make large robot arms for industrial applications. But unlike the heavy robot arms in use today, the robot limbs built from smart elastomers will be far lighter.

"Our robot arms don't need to be driven by motors or by hydraulic or pneumatic systems - they can be powered simply by the application of an electric current. The elastomer muscles can also be produced in shapes that meet the requirements of a particular application. And they consume very little electric power. Depending on the capacitance, the electric currents that flow are in the microampere range. This type of soft robot technology has huge promise for the future as it is both energy efficient and cost-effective to manufacture," says Stefan Seelecke in summary.