The growth could be the best since 1984. 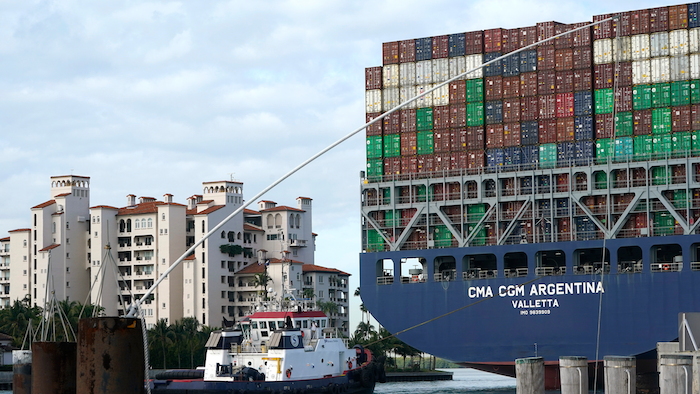 This April 6, 2021 photo shows the CMA CGM Argentina arrives at PortMiami in Miami. The U.S. economy grew at a solid 6.4% rate in the first three months of this year.
AP Photo/Lynne Sladky, File

WASHINGTON (AP) — The U.S. economy grew at a solid 6.4% rate in the first three months of this year, setting the stage for what economists are forecasting could be the strongest year for the economy in possibly seven decades.

The Commerce Department said Thursday that growth in the gross domestic product, the country's total output of goods and services, was unchanged from two previous estimates. The gain represented an acceleration from growth at a 4.3% rate in the fourth quarter.

Economists believe GDP growth has accelerated even more in the current April-June quarter as increased vaccinations have allowed for more businesses to re-open and encouraged consumer to get out and spend. The spending has been aided by the nearly $3 trillion in support the government has approved since December.

“This summer will be hot for the U.S. economy,” predicted Lydia Boussour, lead U.S. economist for Oxford Economics. “As the health situation continues to improve, consumers sitting on piles of savings will give into the urge to splurge on services and experiences they felt deprived of during the pandemic.”

Boussour forecast that GDP growth in the current April-June quarter will surge to an annual rate of 12% and growth for the entire year will come in at 7.5%. That would be the best annual performance since 1951.

Even economists whose forecasts for 2021 growth range from 6% to 7% believe growth this year will be the best since a 7.2% gain in 1984 when the economy was still recovery from a deep recession triggered by the Federal Reserve to halt a bout of inflation.

Economists believe growth in the current quarter will be enough to push GDP output above the previous peak set in the fourth quarter of 2019 before the pandemic struck, ending the longest economic expansion in U.S. history.

Thursday's GDP report was the government's third and final look at first-quarter GDP.

Consumer spending, which accounts for more than two-thirds of economic activity, grew at a sizzling annual rate of 11.4% in first three months of the year, up slightly from the 11.3% growth estimate made a month ago. Consumers benefited from a round of $1,400 individual payments that were included in the $1.9 trillion support package Congress passed in March.

The first-quarter spending gain reflected increases in goods purchases, led by auto sales, and gains in spending on services, led by food services and travel accommodations, two areas that have benefited from the re-opening of the economy as vaccinations have increased.

Business investment grew at a strong 11.7% rate, better than the previous estimate of 10.8% growth, while government spending increased at a 5.7% rate, slightly below last month's estimate of a 5.8% gain.